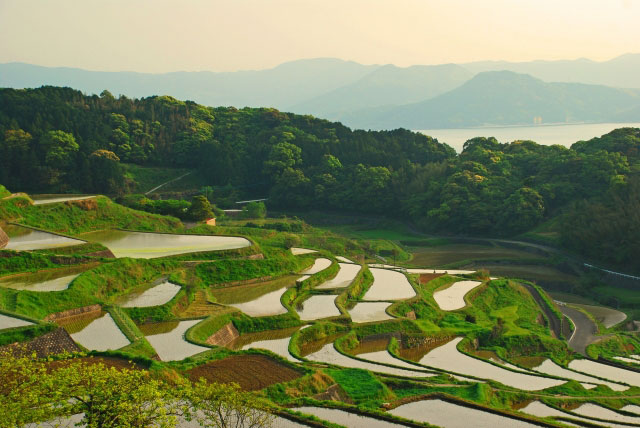 Rice, rice and more rice… we continue our series about What Is Rice Really? after having explored the plant, and short-grain, medium-grain and long-grain rice. Have you tried any of the recipes we’ve suggested yet?

While you were cooking rice, have you ever wondered how it actually gets from its beginnings as a tiny seed to your kitchen?

Growing rice—especially in Japan—is an endeavor both large and small. The careful attention that rice farmers pay to each minute detail of the rice growing process leads to the crop yields that feed the Japanese people. Farmers consider two things as they grow rice:  the plant itself and the environment used to grow it. 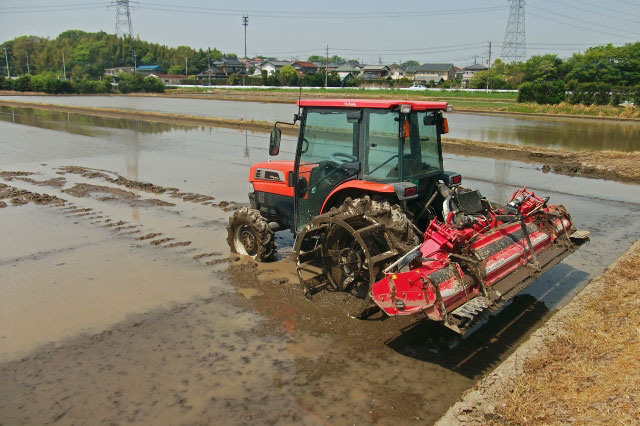 Rice farmers care for the rice plant from dormant seed through harvested food. Rice seeds were originally gathered from wild rice plants; however, in modern times, rice seeds are carefully selected and stored from previous harvests, as well as hybridized in cultivation facilities. The type and quality of the seed is hugely important to the type and quality of the yield in any given growing season. Rice seeds are the unhulled, unprocessed grains that are selected from the rice crop during harvest. Good seeds are generally of uniform size, will germinate 80% of the time, are free of pathogens, and produce seedlings that are vigorous.

Seeds can be sown in a rice field in one of two ways: either through transplantation or direct seeding. Transplantation uses pre-germinated seeds that are sprouted in a seedbed comprised of water, nutrients (such as compost) and soil, generally indoors to protect them from contaminants and animals. Once the seeds have sprouted and have established themselves, they are transplanted, either by hand or by using a seeding machine. On the other hand, direct seeding allows farmers to broadcast ungerminated seeds in fields, and let them establish themselves wherever they fall. In larger farms, and especially in Japan, farmers transplant seeds to better ensure a safe and predictable harvest.

Growing rice is only possible when an environment is created that will allow the plants to flourish. Rice farmers are incredibly concerned with the quality of the soil, the quantity and purity of the water, the heat of the sun and protecting the plants from diseases and pests. Managing soil is the first step in rice production. During a Japanese winter, soil lays fallow and is allowed to rest. In the beginning of spring, around the time when cherry blossoms are in full bloom, rice fields or paddies are tilled, which means the soil is dug up, churned, and aerated with straw. Farmers amend the tilled soil with fertilizers, such as compost or nitrogen and potassium, and begin smoothing the rich, loamy land in preparation for drenching with water. 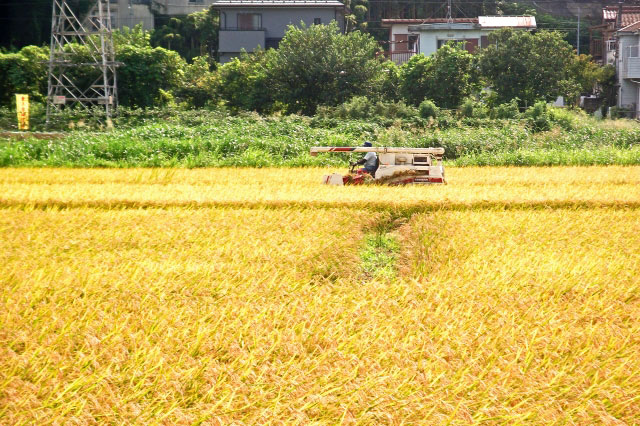 Water in Japan is a vital resource–from rain, to rivers, to reservoirs–and rice is grown using wet cultivation. In the spring, the smoothed, tilled land is flooded with water to a uniform depth, and then planted with seedlings. Every day, the water level is monitored to ensure that the plants grow with adequate hydration, and that water is flowing with nutrients along flat fields and terraces. The intense heat of the summer months, combined with nutrient-rich soil and plentiful water, helps the rice plants to grow tall and healthy. Along with watching the water levels, farmers look out for insects that seek to consume the plants, weeds that want to overtake the growing areas and diseases that could infect the plants every day. You may have seen images of green rice paddies, but a successful crop grows tall and becomes golden through the summer, until it is ready for harvest in the fall.

Have you ever visited a rice field? We’d love to hear your experiences… and stay tuned for next month’s post about harvesting rice in Japan. The harvest season is an important time throughout Japan, when Japanese people share rich stories, traditions and festivals!

I was feeling a little nostalgic today, so I thought I’d write about my home state in terms of 5 Hawaiian “Local Grindz”. Being on the mainland, eating like a local is the closest I can get to being there! Hawaii is such a mixed bag of cultures, the choices that I could come up with seem infinite, but in my opinion there are a handful of favorites that never change, no matter how many generations have passed. I also qualified my 5 based on them being distinctly native to Hawaii; although I refuse to verify whether they actually originated there. Close enough, I say.

1. Poke
Regardless of what Polynesian fisherman first started cutting up his leftover ahi catch into little pieces so he could eat it as a snack, Hawaii gets the credit for this dish which has become a mainland sensation. Since most Americans are more used to raw fish now since the widespread popularity of sushi, poke (pronounced po-keh) has found it easier to gradually work its way into the mainstream.

Poke has been around for a long time in Hawaii, available in containers at almost every supermarket in the Islands; kind of like how salsa is sold in the refrigerated section here. Usually seasoned with soy sauce, sea salt and sesame oil, the raw ahi tuna is mixed with green onions, Maui onions and limu, an edible algae that has long been part of the ancient Hawaiian diet. Sprinkled with sesame seeds, a bowl of fresh poke is like eating the catch of the day, right on the beach. 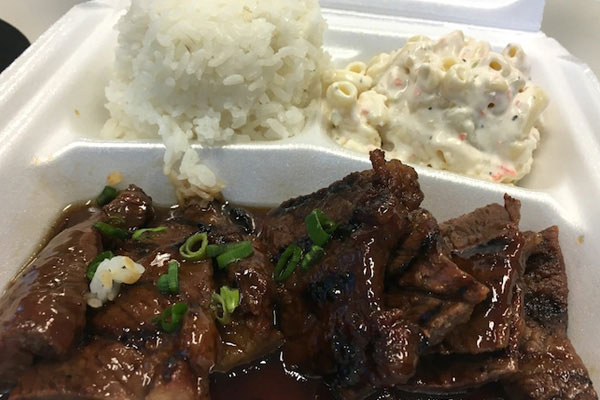 2. Beef Teriyaki
Teriyaki is an interesting study in origins. In Japan, where the taste of tangy-sweet soy sauce and sugary flavor was undoubtedly first made, the term teriyaki is mainly used to describe a cooking method. The “teri” part refers to the glaze of the teriyaki sauce, and “yaki” means to grill. With all the Japanese immigration to Hawaii in the late 1800s, the taste was brought over, but it can be said that the sauce itself, as the marinade that we know today, was a Japanese-American invention.

It took an influence of Western culture to apply teriyaki to beef, I’m sure. If I think back to my early days of basic plate lunches, “teri-beef” was always a staple. It makes sense–what can possibly go together better as a combination than beef teriyaki, macaroni salad and rice? Add some chopped cabbage and you’ve successfully fended off your guilty conscience of not eating your vegetables. I can smell it on the grill even now… 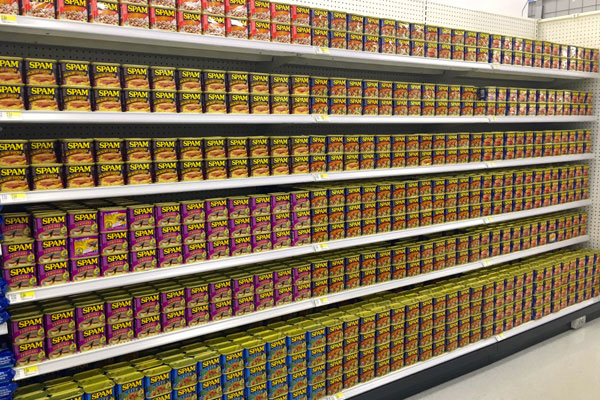 3. Spam Musubi
There is no way that this isn’t a Hawaiian original. Who the heck else glorifies Spam like this? Think about it, locals consume more Spam there than anyplace else in the U.S.; it’s available as breakfast meat at McDonald’s and Burger King. Another Japanese influence, Spam Musubi is like the perfect portable snack food. And they even stack up like bricks because they’re shaped that way!

It is the ubiquitous picnic favorite, bake sale staple and pot luck standard of local cuisine. Even though every family has their own way of making Spam Musubi, in the end it’s still rice and spam and shaped the same way. Even though the high sodium content is probably not that great for you, I love it anyway. If you’ve never heard of Spam Musubi, read my post here on how to make it. 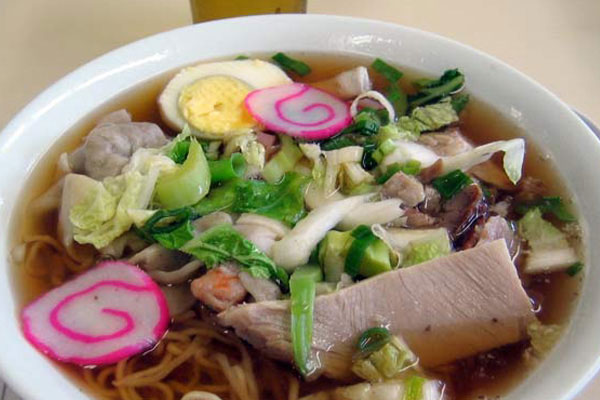 4. Saimin
My Dad would always complain about not being able to find good saimin when he was living in California. He was right. It’s tough to find–in many ways this Hawaiian classic has been supplanted by the ramen juggernaut that is taking over the world, even in Hawaii. But to me, there will always be a place for saimin, and I predict it will make a strong comeback one day.

The noodles are practically the same between the two dishes, but the saimin broth is much lighter than ramen, both in taste and color. Typical toppings would be some scrambled egg slivers, green onion, Chinese cabbage, char-siu (a Chinese style BBQ pork) and kamaboko, the pink and white Japanese fish cake that you see everywhere with the swirl in it. How much more Hawaiian can it get, with all those cultural roots. Plus, a common substitute for the char-siu that you’ll often see is Spam!

By the way, there are McDonald’s locations in Hawaii that serve their own brand of saimin, which isn’t bad–I’ve tried it. 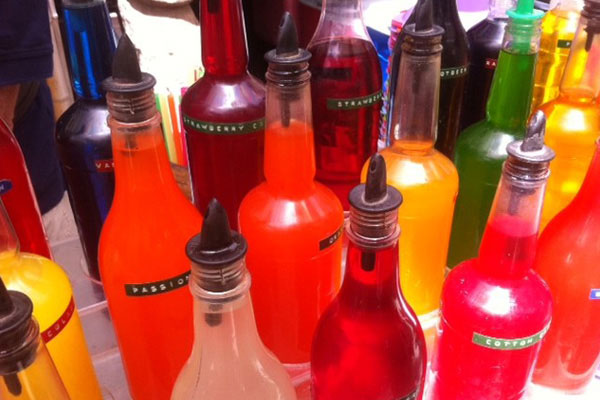 5. Shave Ice
“Shaved” Ice, or kakigori, as it’s known in Japan, was no doubt the influence that became the Hawaiian “shave” ice as we know it today. But the Hawaiian version has earned its place as an American original. The ice is much finer than Japanese kakigori; and the flavors are distinctly tropical, like guava, pineapple, coconut, passion fruit, lychee, and mango. Some of them taste so much like the real thing it’s uncanny–they remind me of how they get those flavors into the tiny little jelly beans.

There’s no doubt every country in the world has its own version of finely shaved ice dessert, but this one that evolved from kakigori has its unique toppings and fillings at the bottom. Ice cream and/or adzuki beans inside, for example; or flavored with sweet condensed milk along with the colored syrup, often called “Japanese style” or “snow cap” among the locals. Read more about some ice desserts here.

If you go to Hawaii, you must make a pit stop at Matsumoto’s Shave Ice stand on the way to the North Shore of Oahu–everyone else does, including busloads of Japanese tourists everyday, since 1951!