Hi there, Zo fans!  We hope that you’ve all been well and staying safe and healthy!  We’re back with another B-kyu Gurume post.

We think that after all of the savory goodness we’ve been enjoying, it’s time for a bit of sweetness!

We’re excited to introduce akumaki this month, a unique dish from Kagoshima Prefecture in Kyushu. 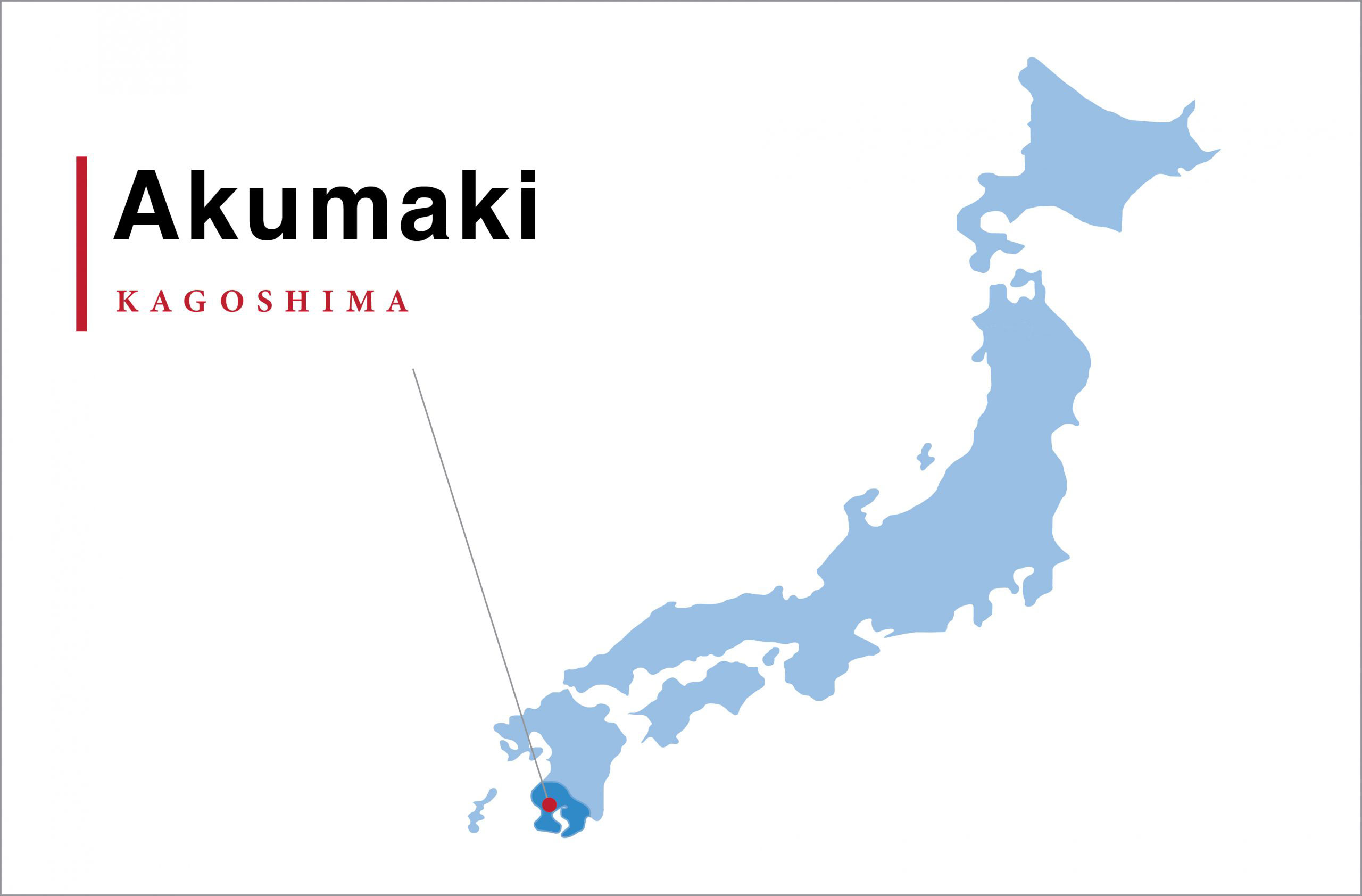 Akumaki is truly unique! It’s made of soaked or steamed mochigome – the glutinous rice used to make mochi – wrapped in bamboo leaves that are tied into packets with palm leaf strings. 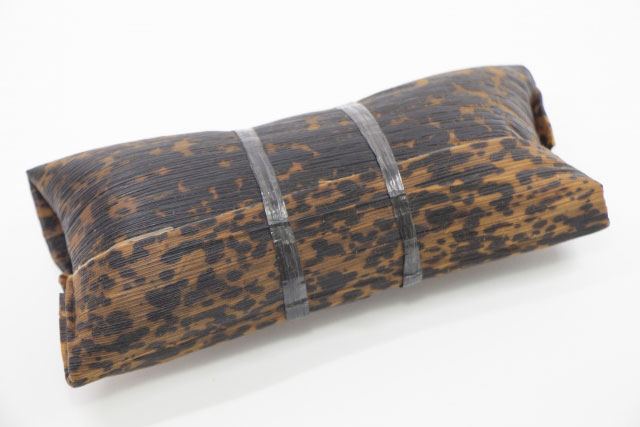 The packets are boiled in lye, which is a mixture of water and charcoal ash. After a few hours, the rice inside the packets is cooked to a smooth, brown, chewy consistency, the perfect base for eating. 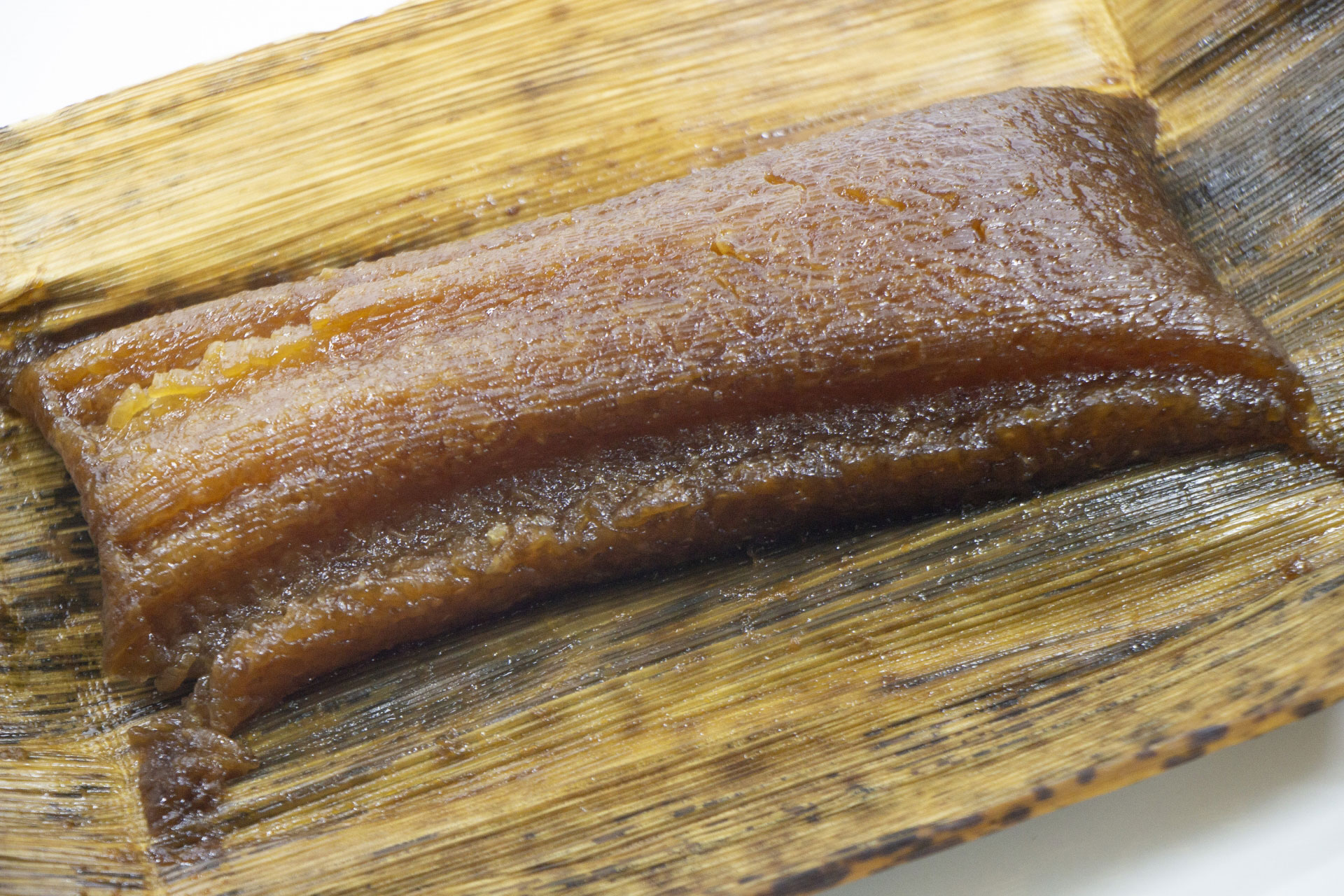 The akumaki is drizzled with sweet syrup, regular or brown sugar, or even kinako, a roasted soybean flour that has a pleasantly sweet taste and powdery texture. It usually takes two days to make akumaki, with the first day focused on preparing the ingredients and leaves, and the second day actually cooking the packets. The end result is worth it! 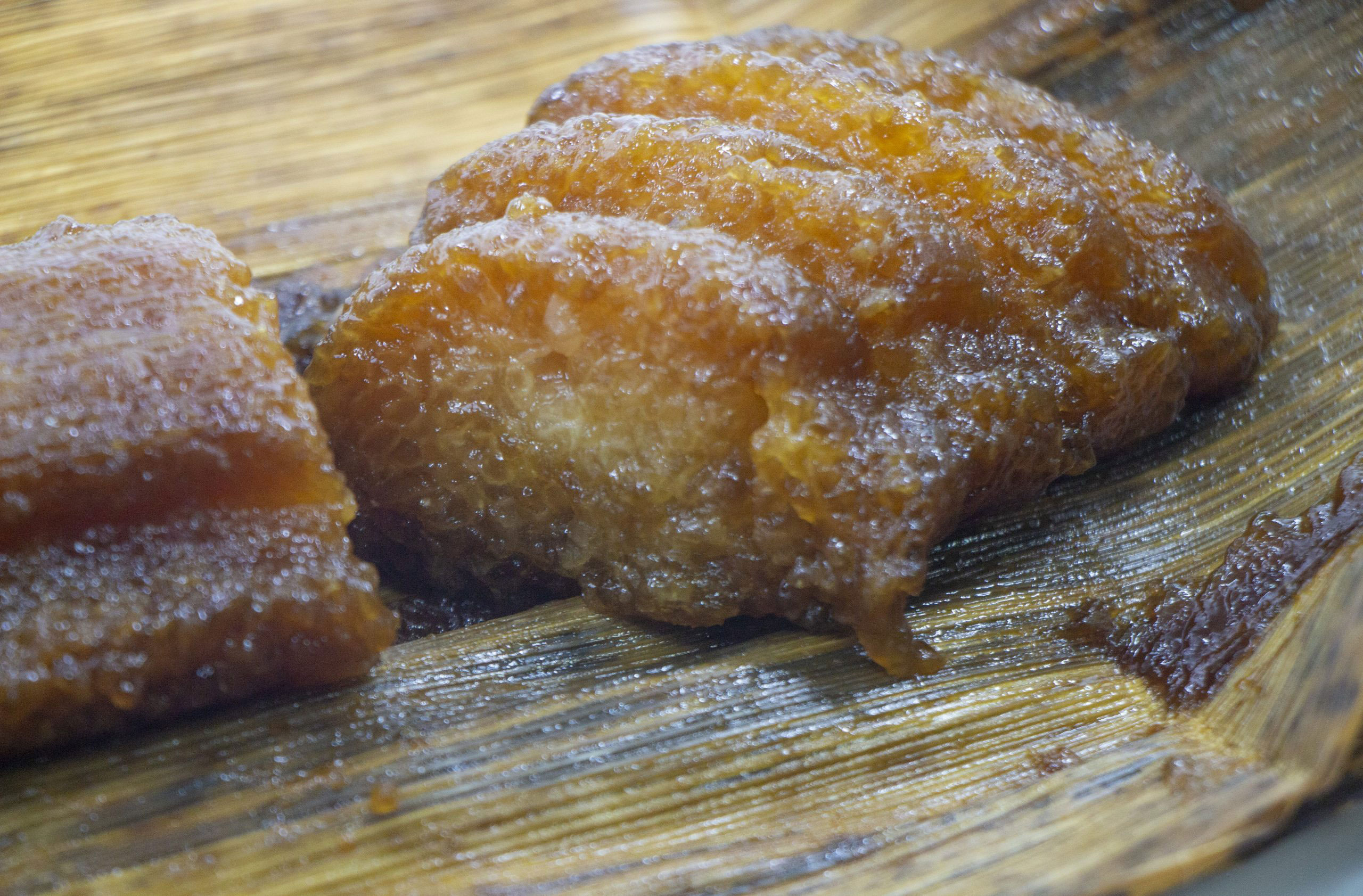 Many Asian cultures have dishes boiled or steamed in leaves, such as Indian panki or Thai-style baked fish, and this Japanese dish is part of that tradition albeit with a unique twist.  Unlike the mentioned Indian and Thai dishes, Akumaki, is more sweet as opposed to savory.

Traditionally, the two leaves used to make this dish are bamboo, for cooking, and palm for tying.  Today, akumaki is still made with palm leaves, but modern conveniences like cooking string or twine are easier to use for tying the packets.

Even more interesting than the ingredients is the legend surrounding the origins of akumaki. Legend says that akumaki was given to boys who were training to be samurai soldiers during the 16th century. The boys were treated to these sweets which were easy to make, transport and preserve. Lovely how something sweet was given to warriors!

Today, akumaki isn’t usually made at home but it’s still part of a culture treating children to sweetly delicious goodies. Most often, it is served as part of the Children’s Day tradition, which used to be celebrated as Boys Day, in May. As a regional delicacy, it’s definitely part of our favorite B-kyu gurume lineup!

Have you had akumaki before? If so, share your story with us and be sure to tag us using our hashtag #zojirushiamerica on Instagram!

Are you still craving Utsunomiya gyoza  from our B-kyu gurume post last month? Well, don’t worry because we’ve got an amazing new dish this month – suttate udon – and after you read all about it, you’ll be craving this dish, too! Kawajima is a fertile plain banded by the Ichino, Arakawa, Iruma and Toki Rivers. It’s known for its beautiful landscape and rice, tea and sesame farms. In this area, each season is exaggerated – cold weather is icy, rains are torrential and hot weather is sweltering.

It’s during the hot weather months that Kawajima’s signature B-kyu gurume dish – suttate udon – is popular. The dish consists of fresh, bouncy udon noodles dipped into a suttate dipping sauce. The sauce is what makes it special! Suttate sauce is made with freshly ground ingredients, often prepared at the table. Sesame seeds are ground in a suribachi using a surikogi, or a Japanese-style mortar and pestle. Once the sesame seeds are finely ground and fragrant, miso , thinly sliced cucumbers, finely chopped onions, aromatics and herbs such as ginger and shiso leaves are added to the mix and pounded to form a paste. And to the paste… cold, cold water…perfectly ready to dip in udon noodles!

Suttate udon has a beloved history in the Kawajima region. The wheat for the udon noodles and sesame for the sauce were locally cultivated. The nutrients in the ingredients were replenishing. And the cold dish was eaten during the hot summer months by local farmers to beat heat exhaustion from their labor. Inexpensive and locally-produced, suttate udon was almost exclusively prepared at home, with the sauce originally made with just cold water, miso and ground sesame. Even the name is local term, a slurred form of suritate, which means “freshly mashed.”

In 2008, the Kawajima Chamber of Commerce wanted to enter suttate udon in the 4th Annual Saitama Local Street Food Championship. They asked a local chef and restauranteur, Koji Adachi, to come up a new recipe. And his recipe for using dashi in the sauce instead of cold water made all the difference. The dish won fourth place in the competition, becoming an established B-kyu gurume favorite!

After the competition, word of suttate udon spread around Saitama Prefecture and of course, to the rest of Japan.

We love udon noodles, and make the dough in our breadmakers. They’re so wonderful to eat and we hope you try them with homemade suttate sauce! 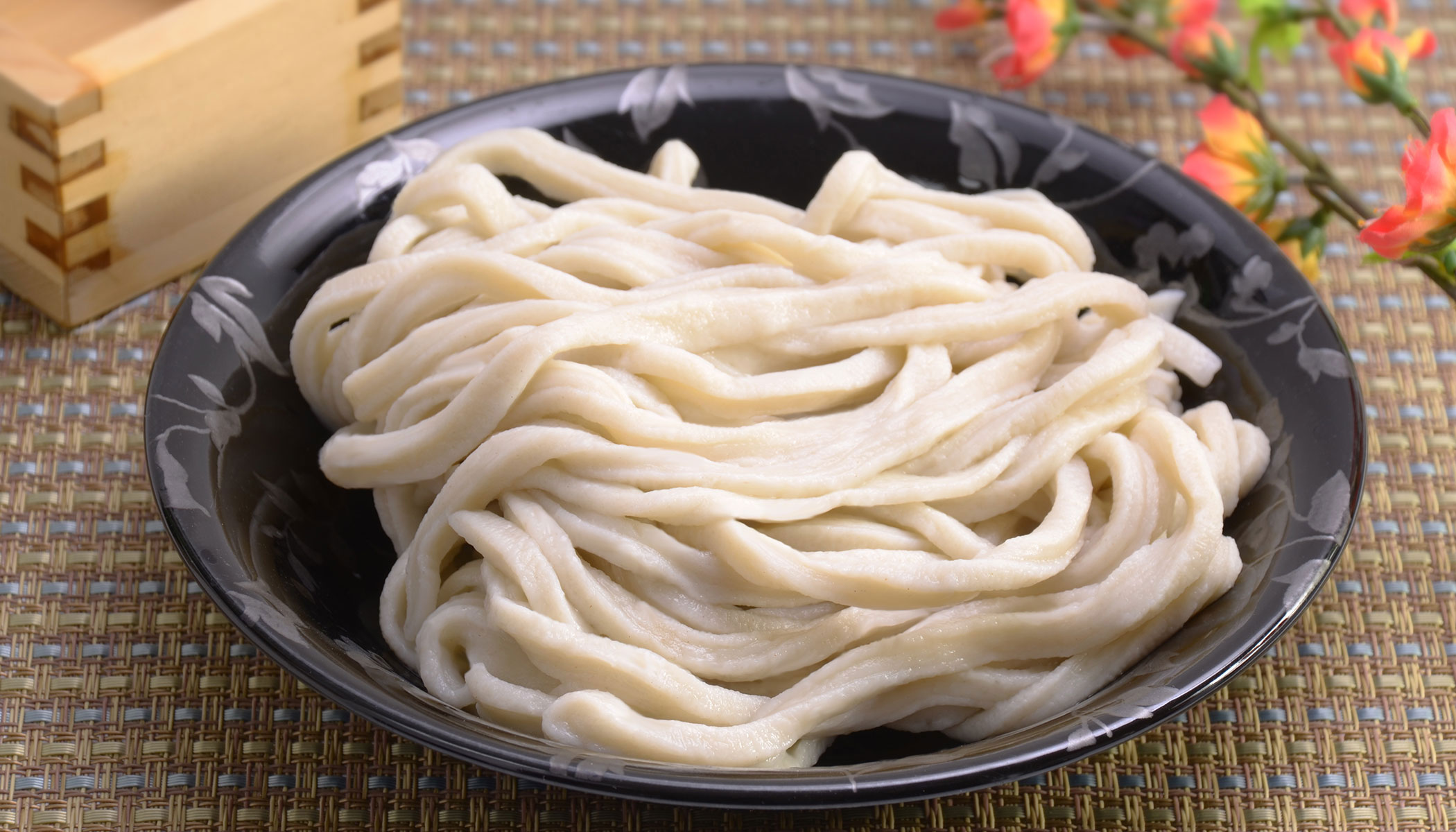 Hi, Zo fans!  Welcome back to another B-kyu Gurume blog post!  Today, we’re featuring the beautiful city of Utsunomiya and its delicious cuisine.

Utsunomiya is a city in Tochigi Prefecture, just a bit north of Tokyo. 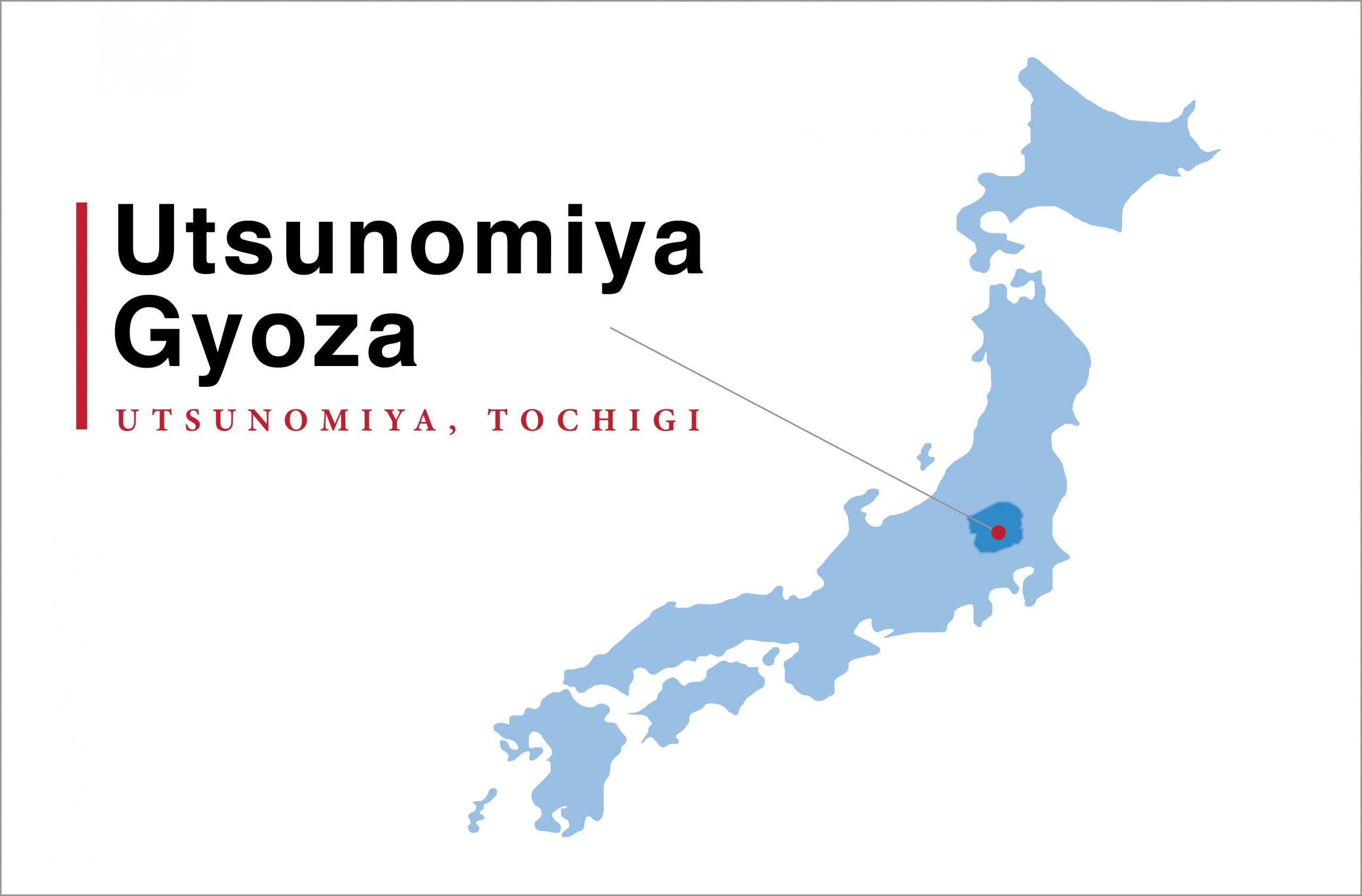 It’s gorgeous, charming, and home of juicy Utsunomiya gyoza.  Yup.  Those fantastic Japanese dumplings that are oh-so-delicious steamed, pan-fried, boiled, and even deep fried.  We’re checking out Utsunomiya gyoza this month, and promise that by the end of this post, you’ll want to cook up a batch yourself!

Utsunomiya City became the home of gyoza through a few quirks of historical fate combined with concerted effort by city businesses and associations.  Utsunomiya had a base for an army division that previously operated in north-east China and brought back gyoza forbearers, Chinese jiaozi dumplings.  Then the jiaozi dumplings were “Japanized” and made into the softer, smaller gyoza we know and love today.

Well, it turned out that gyoza were great to eat no matter the season!  In cold weather, gyoza were comforting boiler and served with a broth.  In hot weather, pan-fried with a dipping sauce and a cold beer was the way to go.  And this worked out perfectly in landlocked Utsunomiya City, which experiences both weather extremes.  Gyoza became extremely popular in the city, becoming a local staple and economic driver.

These gyoza helped revitalize the city when the other economic pillar collapsed. During the late 1980’s, Utsunomiya City was known as a place to mine oya stone, a beautiful stone quarried from deep in the earth and used for buildings all over Japan. A quarry cave collapsed in 1989, effectively depressing the stone industry in Utsunomiya City. City restaurateurs, business associations and the media decided to highlight their regional gourmet cuisine – gyoza – to revitalize the city’s economy.

And luckily, we all benefit from their plan!

Utsunomiya gyoza come in many sizes and with multiple types of fillings. Commonly, they are filled with regionally sourced pork, cabbage, chives, garlic and salt. When combined and finished into shape, Utsunomiya gyoza are steamed, boiled, pan-fried or deep fried to the diner’s liking. 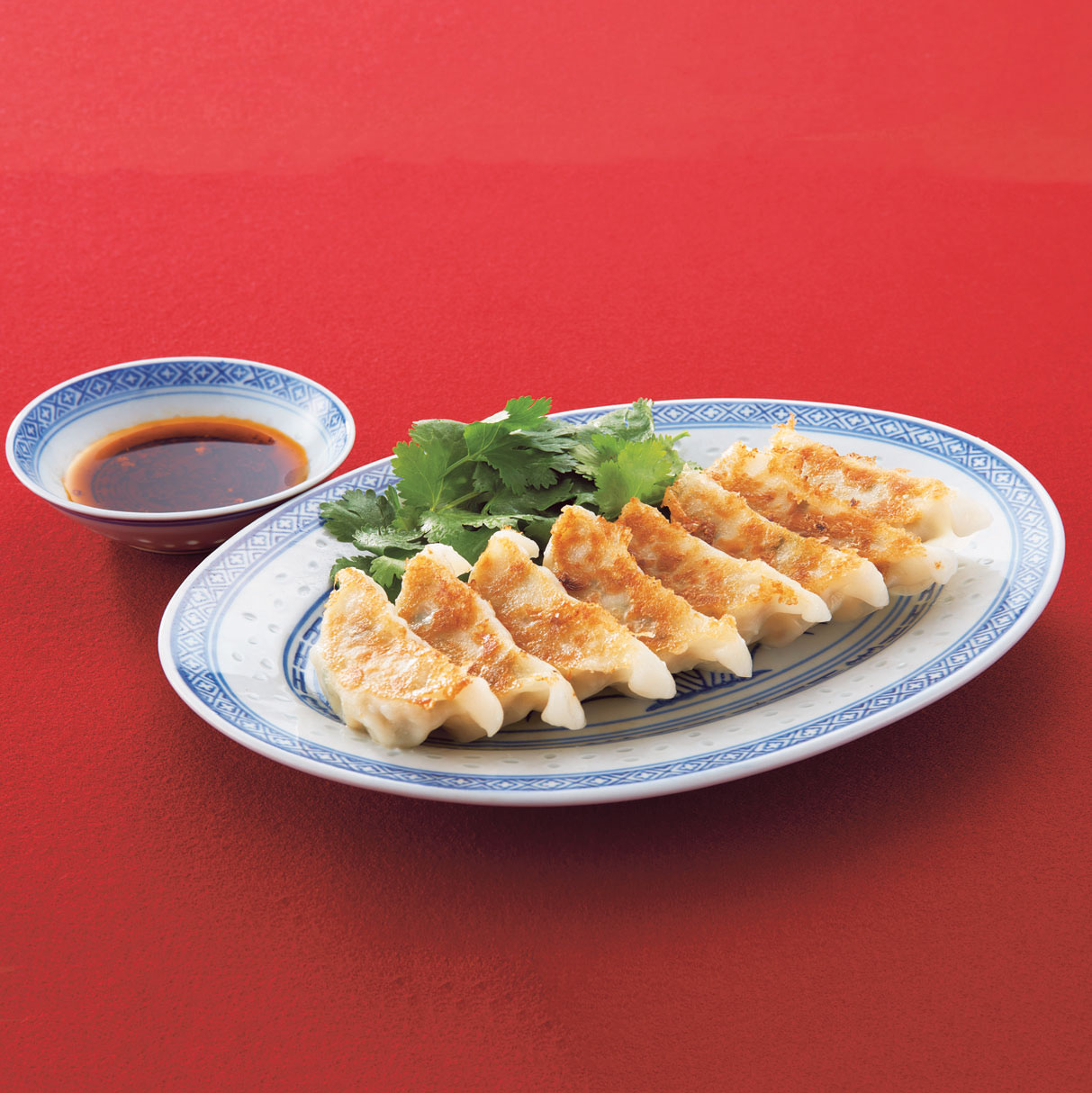 While they are typically served with a dipping sauce, Utsunomiya gyoza are so flavorful that many enthusiasts prefer eating them without any condiments, letting the juice from the filling permeate their taste buds instead…we’re craving some already!

Utsunomiya gyoza can luckily be found all over Japan, thanks to concerted marketing and distribution efforts by leading businesses in Utsunomiya City. And again, we happily benefit from their plan!

We love these dumplings and are always up for making them using our Gourmet Sizzler® Electric Griddle (EA-BDC10). Do you make your own dumplings at home? Share your recipe and tag us with #zojirushi on Instagram!  And don’t forget to let us know Zo fans, how do you like your dumplings?  Steam, boiled, pan-fried, or deep fried?  Let us know in the comments.