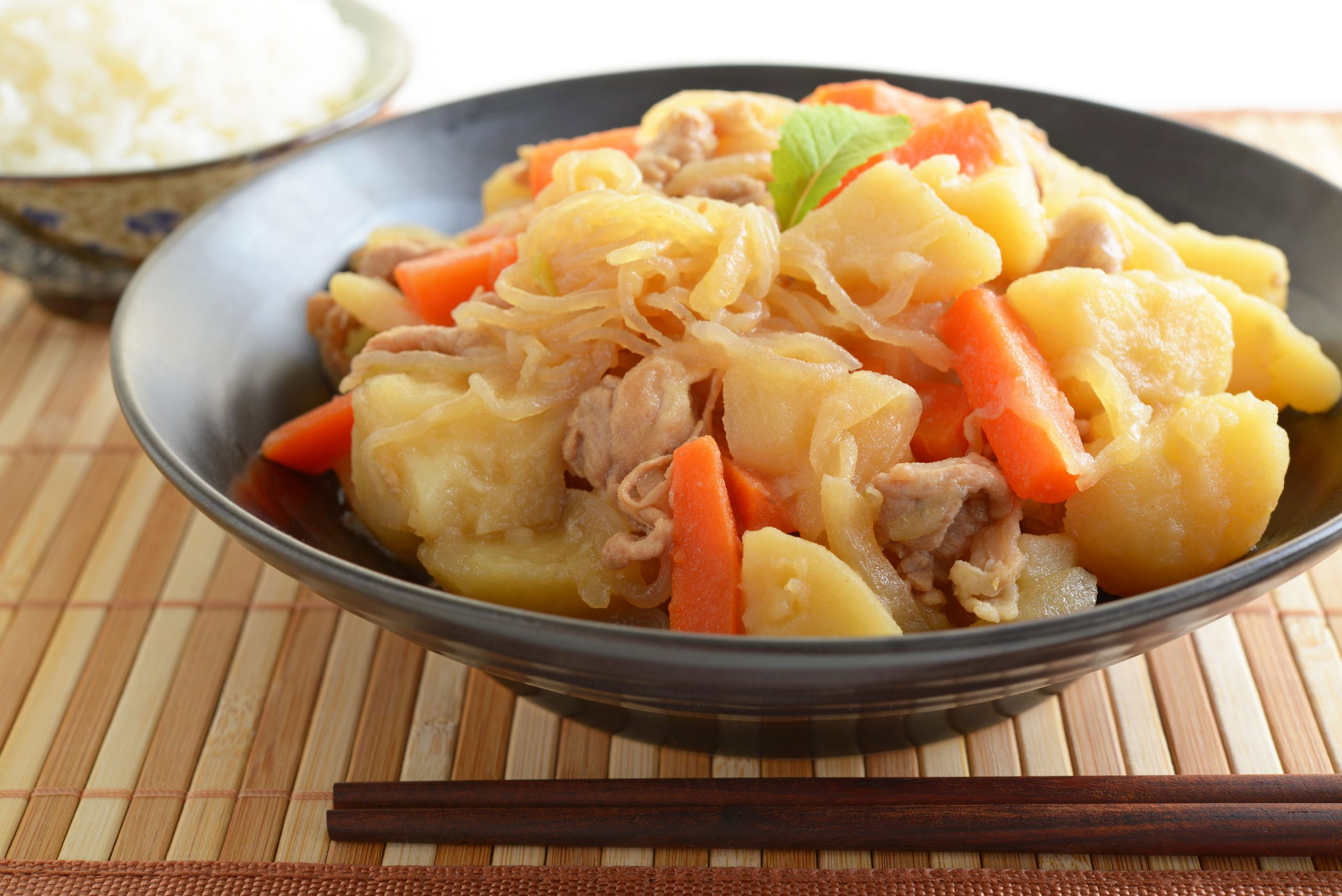 Today, we visit mom’s kitchen for one of the most famous home-cooked meals in Japan — Nikujaga (sometimes spelled Nikujyaga). This savory beef stew is the epitome of comfort in a bowl, with large chunks of potato, noodles, and tender beef in a warm, umami-filled soup. It is simple, nutritious, filling, and a true staple in any Japanese household. Is your mouth watering yet? Ours, too! Below, we’ll dive into the history of this dish and how to make this delicious meal for yourself.

Nikujaga has deep roots. It was invented in the late 19th century by chefs in the Imperial Japanese Navy as a Japanese version of a British stew. This type of Japanese adaption of Western cuisine even has its own word – “yoshoku,” and nikujaga is one of the first recorded examples of Japanese “fusion” food.

The story goes that the Naval admiral Tōgō Heihachirō wanted his naval cooks to create a version of the beef stews served in the British Royal Navy, but because Western ingredients such as demi-glace were not familiar to the chefs, they made their own rendition through soy sauce and sugar. It worked! Apparently, you can still find the original recipe in Japan’s “Navy Kitchen Textbook.”

This dish was lauded for its simplicity, soothing flavor, and the high energy it fueled for the hardworking sailors. However, nikujaga was mainly a dish cooked at home by mothers until the 1970s, when there was a renewed interest in the dish and popularity skyrocketed. Now, nikujaga fans all over the world enjoy the dish for all occasions, and you can find this dish in many Japanese restaurants as well.

Nikujaga directly translates to “meat and potatoes. “Niku” means meat and “jagaimo” means potatoes. Easy, right? The recipe is even easier. There are four main components to the dish that bring this stew to life. Here are the main ingredients broken down:

We have a pretty traditional Zojirushi Nikujaga recipe available on our website that you can make easily in a saucepan. Try it out, and let us know what you think!

How did your nikujaga come out? Make sure to tag Zojirushi on your photos with #zojirushi on Twitter, Facebook, or Instagram to let us know how you did!