Have you ever tried Kushikatsu?  Kushikatsu, also known as Kushiage, is a famous and delicious Japanese dish of deep-fried meat and vegetables served on a skewer. In fact, kushi actually refers to the bamboo skewers used to assemble this dish and katsu refers to the deep-fried cutlets.

The dish is most commonly made with chicken, pork, seafood and a variety of seasonal vegetables. The ingredients are dipped in egg and flour, and breaded with panko then deep-fried to be golden brown.

Kushikatsu is said to have originated in downtown Osaka in Shinsekai in 1929, and was primarily made for blue-collar workers. The skewers made the dish a fast food of sorts and were both inexpensive and filling for the locals of the region. While skewers are popular across Japan, the Osaka region’s Kushiage is particular in a few ways. First, they offer one type of ingredient per skewer, whereas other regions might interchange their meats with vegetables, or place more than one type of meat per skewer. Secondly, the Shinsekai skewers are generally a bit smaller than other regions, because it is customary to order several for each meal. Lastly, in Osaka, the skewers are served standalone and are usually dipped in a shared pot of sauce before eating, to thinly coat the skewer (double-dipping is strictly prohibited). Other regions are known to instead serve the skewers with ginger, sauces, or other meats on the side of the skewer. 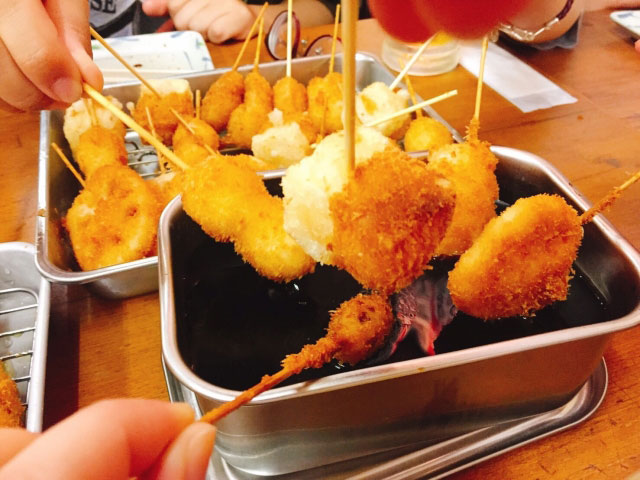 Some places in Japan offer Kushikatsu as a fondue-style meal, where you dip and prepare your own skewers at the table. If that sounds fun to you and you are ready to make this famous dish at home, here is a great video with the recipe for you to learn the ropes.

If you’re visiting Osaka and are looking for the best places to find Kushikatsu, give these a try!