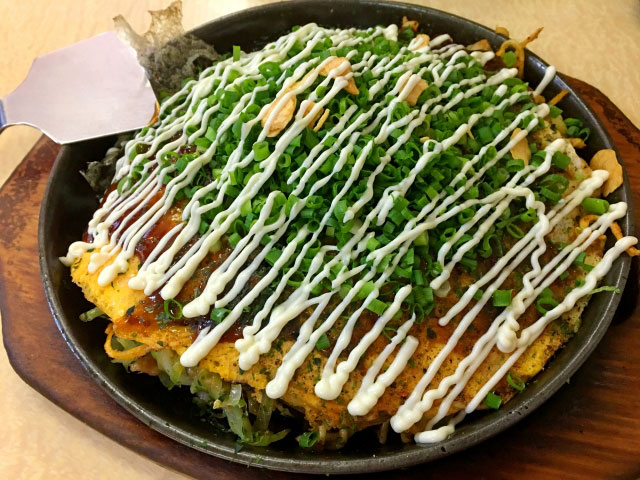 May is a beautiful time to visit Japan. The air is fragrant and the mild, sunny weather makes it perfect for sightseeing. One of the most famous places in Japan is Hiroshima, and this month we explore its signature dish, Hiroshima-style Okonomiyaki, along with some history and culture about the area. 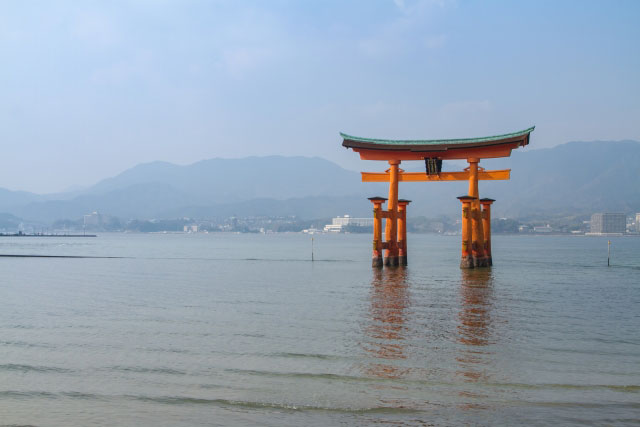 Known as the “City of Water” because of the six rivers that flow through it, Hiroshima City lies at the coast of the Seto Inland Sea and serves as the administrative center of the prefecture. The city was originally founded by Terumoto Mōri in the 16th century as a feudal town, and served as gateway through the mountain passes in the north and an important trade center along the sea coast. Hiroshima City is famous for many things–from the fresh oysters that have been cultivated there since ancient times, grilled to perfection, to the rich cultural diversity brought by traders. Visiting Hiroshima City today means visiting Hiroshima Castle, Shukkei-en Garden and the red Taho-to Tower at Mitaki-dera Temple, as well as the Genbaku Dome and Peace Memorial Park.

A street vendor selling hiroshimayaki sits among other food stands

Miyajima Island, formally known as Itsukushima Island, is famous for the awesome sight of Mt. Misen and the glorious Itsukushima Shrine. Mt. Misen is considered one of the most beautiful spots from which to view the islands of the Seto Inland Sea and from which to enjoy the virgin forests that are designated as a national natural monument.  When not climbing the peak, visiting the Itsukushima Shrine and the accompanying Ōtorii or Grand Gate are a must. Both were built in 593 and to this day, seem to float in the waters of the sea itself! Depending on when you travel, don’t miss the Water Fireworks extravaganza.

Miyajima Island is a ferry ride from the coast, and when returning to the mainland, visiting the Onomichi / Fukuyama area provides a wonderful trip to a scenic port town and temples from which to enjoy the view. And in autumn, when the maple leaves dramatically change colors, trekkers flock to Northern Hiroshima Prefecture and the Bihoku area to climb in and out of the valleys and ravines, catching glimpses of the sea and mountains. 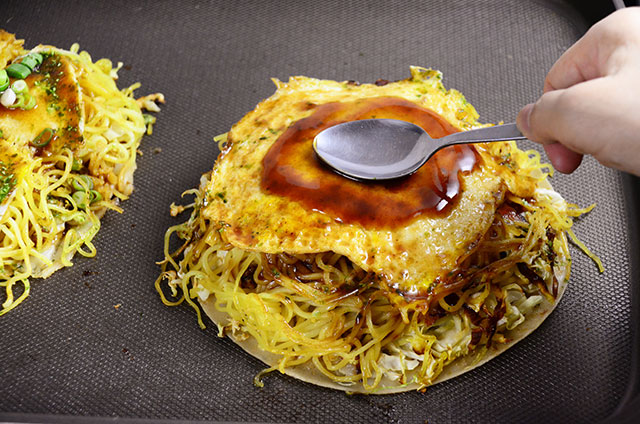 Traveling all over Hiroshima Prefecture is sure to whet your appetite! Along with fresh, grilled oysters, Hiroshima is famous for its okonomiyaki. Okonomiyaki is a portmanteau from “okonomi” which means “as you like it” and “yaki” which means “grilled”. The Hiroshima-style okonomiyaki, also known as hiroshimayaki, was conceived of in the 1950s, during which time it provided inexpensive food for the population recovering from World War II. Hiroshimayaki is made by layering ingredients, as opposed to mixing finely chopped ingredients into the thicker pancake-like batter as is popular in the Osaka area. The traditional form of hiroshimayaki is a thin layer of crepe, dried bonito powder, shredded cabbage, tempura scraps, thinly sliced green onions and bean sprouts topped with pork belly and another layer of crepe. Once that has cooked, it’s further topped with yakisoba noodles stir-fried in okonomiyaki sauce and a fried egg. All of which is further topped with more sauce, mayonnaise and dried green seaweed powder.

Want to make the resulting goodness? Try out our recipe for Okonomiyaki, Hiroshima-Style! It’s easy to make using our electric griddles and so very satisfying!