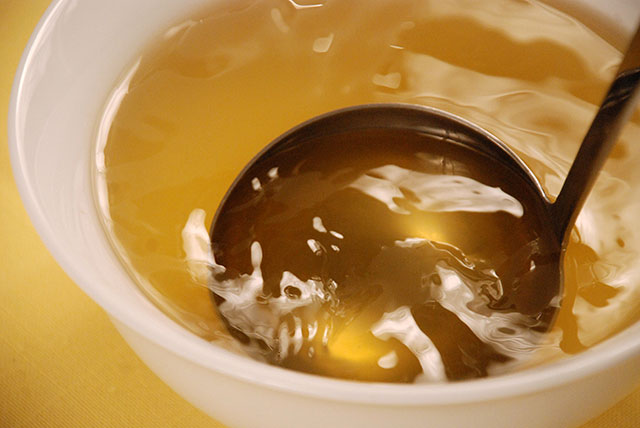 Last month we began our exploration of umami, the “delicious taste” discovered by Dr. Kikunae Ikeda in 1908. Umami is the rich flavor imparted from foods that contain high levels of glutamates, a type of amino acid that, when ingested, tells the brain that the food the body is about to receive is savory, desirable and full of protein.

Umami is at the heart of a Japanese cooking liquid called dashi, which was studied by Dr. Ikeda and which forms the foundation of many Japanese dishes. Dashi is an all-purpose, light stock made simply from an umami-rich ingredient and water. Its role in Japanese cuisine can’t be overemphasized, as it is used to season simmered and steamed dishes, flavor soups and create a base for marinades.

While preparing dashi is simple, it requires a meticulous attention to detail. 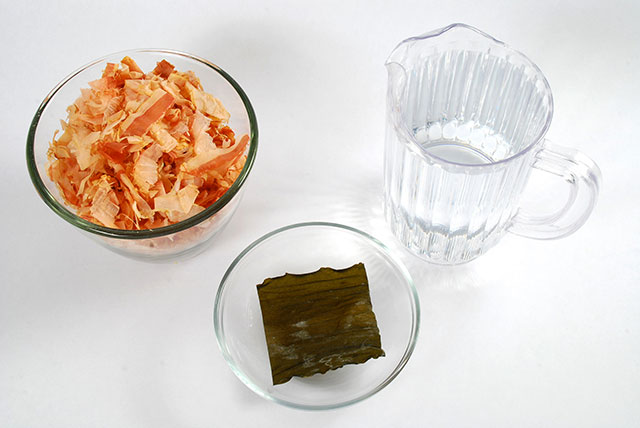 When made from scratch, dashi is made from clean, soft water. Various ingredients are added to the water to give it flavor and to impart umami. The classic way to prepare dashi is to make ichibandashi, which typically consists of simmering shaved bonito flakes—dried, smoked skipjack tuna—and dried konbu kelp in water. While this type of dashi is used to prepare many Japanese dishes, many cooks also use variations of the classic dashi in modern Japanese cooking. Dashi made from dried shiitake mushrooms, dried baby anchovies or sardines, dried scallops, or even just konbu or only bonito flakes have become common additions to the Japanese cook’s dashi repertoire.

When making dashi at home, it’s important to use high-quality ingredients that have been air dried, avoiding frozen ones, as freezing alters the flavor and aroma of the ingredients. The best quality bonito comes in stick form and is approximately six-to-eight inches in length. Bonito sticks look like dense, brown hunks of wood that have an ash-white coating. The sticks are made by filleting skipjack tuna, boiling the fillets, then removing the skin and bones from the fish. The fish is smoked multiple times to dry it and to preserve the richness in the fish’s flavor. After, the dried fish is cultured to continue its preservation, and then finally, dried in the open air. When two sticks of bonito are struck together, they should make a hollow sound, like musical instruments! Dried bonito sticks are then shaved using an appliance similar to a mandoline, called a katsuobushi kezuri, and result in pink curls of fish. 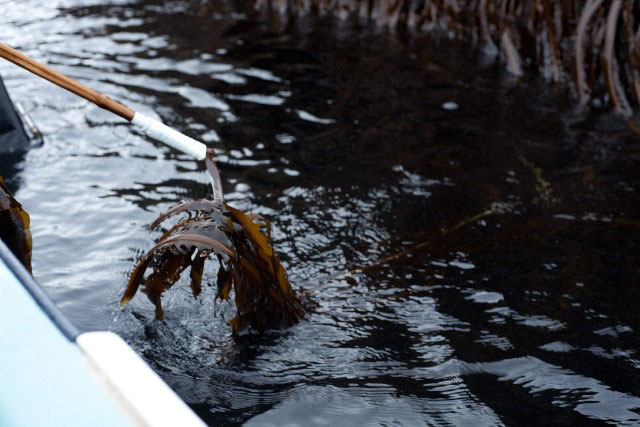 Vegetarian dashi is commonly made using dried konbu or shiitake mushrooms, again with both ingredients of the highest quality. The most prized type of konbu is harvested from the cold waters off of the northern coast of Hokkaido. These giant kelp have wide, thick leaves and a rich amber color. They are harvested, rinsed in sea water and hung out to air dry. Once dried, the konbu will have a distinctive whitish coat, made up of natural sea salts and minerals, which holds much of the seaweed’s flavor. The dried konbu is simply wiped with a damp cloth and then it’s ready to use in making dashi. Simmering dried shiitake mushrooms also makes a vegetarian version of dashi, one with a darker color and more intense flavor.

Cooks often make their dashi from scratch, but when pressed for time, flavorful, high-quality instant, dashi products can be found at Japanese or Asian grocery stores. Modern cooks often keep both as staples in their pantries, giving them versatile options for this foundational ingredient in Japanese cooking.

We’ll share recipes about how to make dashi in our next blog post, so stay tuned! And as always, we’d love to hear how you’ve made dashi, so leave us a comment. 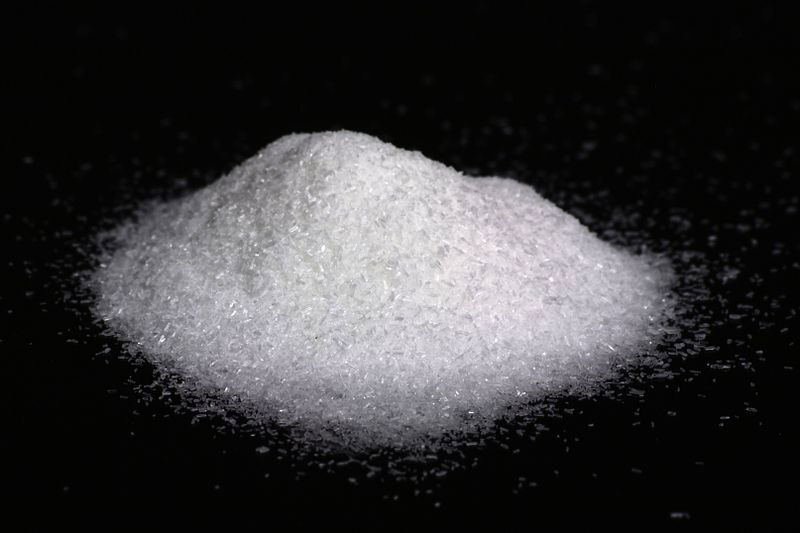 The essential ingredients of Japanese cooking—sugar, salt, vinegar, soy sauce and miso—are primary ingredients, but how do they influence taste? Does ryori no sa shi su se so actually mean flavor, or are they the building blocks of the unique flavors of Japanese food?

In our post this month, we explore umami, what it’s made of and its essential role in gastronomy around the world.

Umami was first discovered in a measurable way by Dr. Kikunae Ikeda of Tokyo Imperial University, now the University of Tokyo, in 1908. Dr. Ikeda, a chemist, theorized that there must be a reason why kombu dashi stock, used in many Japanese dishes, imparted such a rich, savory taste to food. In his quest to understand why, Dr. Ikeda discovered that kombu, the type of seaweed used in preparing dashi stock, was high in glutamates, a type of amino acid that creates a savory taste with a full mouthfeel. Dr. Ikeda’s discovery was followed by those of Shintaro Kodama, who discovered a ribonucleotide called inosine monophosphate, and of Akira Kuninaka, who discovered the ribonucleotide called guanosine monophosphate. These three substances, when absorbed by the taste buds on the tongue, creates a biochemical signal that tells the brain that the food is savory and full of protein, an important human evolutionary adaptation that aided in determining whether a food was safe and desirable to eat. 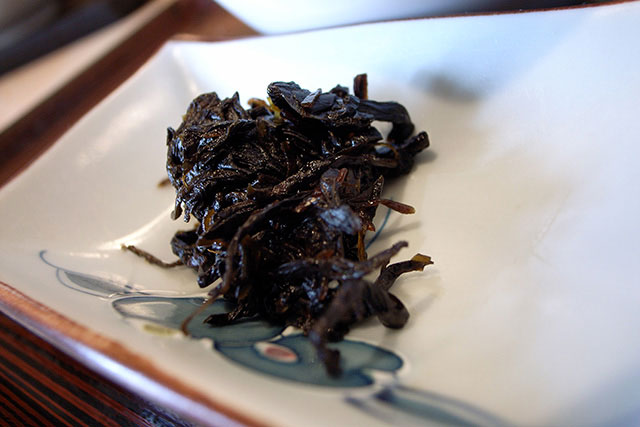 Tsukudani , a side dish, made with umami-packed kombu (photo by Jun Owada)

Since the discovery of salt approximately in 5,000 BCE, the tastes of foods have been categorized into seven categories: sweet, sour, salty, bitter, spicy, astringent and umami. Different cultures have used a subset of these seven tastes as part of their gustatory culture. For example, European culture generally used the first four tastes. Indian culture uses six of the seven. And, before umami was discovered, Japanese culture only recognized four of the seven tastes. Dr. Ikeda coined the term umami, from the Japanese root words “umai” meaning delicious and “mi” meaning taste, and since its modern discovery, umami has become known as the fifth taste in Japanese cooking tradition. While some cultures might only use a subset of the seven tastes in their traditions, they actually use umami as part of their flavor profiles, because glutamates, inosine and guanosine are compounds found in a broad variety of food, everything from seaweed, fish, shellfish, beef, pork, eggs and chicken to mushrooms, tomatoes, cabbage, soybeans, yeast, milk and cheese. Food cultures across the world use these ingredients, and when combined with the other tastes, create savory flavors that are more intense than alone. 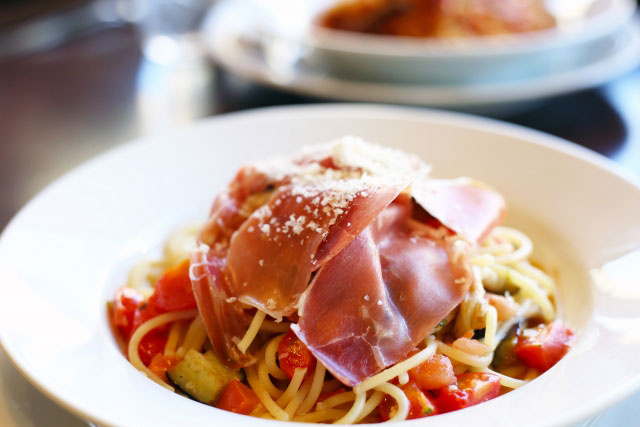 Combining umami ingredients is done in many well-known, familiar recipes… tomato sauce topped with parmesan cheese, sautéed mushrooms, broth and vegetables. Savory flavor becomes more intense when a glutamate component (such as fish or seaweed) is combined with an inosine or guanosine component (such as mushrooms) or simply with table salt. Ancient Romans created garum, a fish paste, that was used as an umami component to many early Italian dishes. In more modern times, American cooks created ketchup, also full of umami and made with tomatoes, garlic, onions and vinegar, and Australians have created Vegemite, a fermented yeast paste full of umami.

The intensity of all flavors in food is increased when an umami ingredient is introduced. And umami is one of the most important elements of Japanese food, especially in dashi. We’ll explore this in more detail next month. Stay tuned, and as always, we’d love to hear your experiences with umami!