When I first heard about the unusually early November snowfall in Tokyo, the first time in over 54 years for the nation’s capital, it immediately brought back memories for me because, yes, I am old enough to have been there for the last time that happened. Just to put that period of time in perspective, in 1962 there was no bullet train yet, there were no skyscrapers in Tokyo, and there were no Western style toilets yet! The second thing that came to mind was global warming, but that discussion belongs on another blog.

Here in sunny SoCal we don’t do snow, do we? But we do make snow–we make it at our local mountains during ski season. And we can drive up there in a few hours! So you can grumble all you want about not having real snow, but it’s hard to complain when the surf and mountains are so conveniently close! 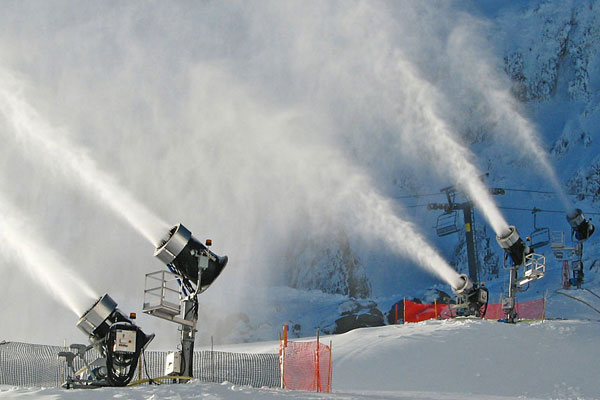 Personally, I find it incredible that real snow can be blown out of machines and cover a whole mountain enough to ski on. These snowmakers literally break water up into small particles, freeze them and blow them into the air in one process. They use massive amounts of water to do this–to cover an area of 200ft. by 200ft. with 6 inches of snow, they need 75,000 gallons of water! Most ski areas are converting 5000 gallons of water per minute, into snow.

And besides making snow for skiing, these machines can create snow blankets to protect crops during freezing weather and are also used to test the snow worthiness of cars and airplanes. Recently snowmaking has resorted to using reclaimed waste water, which not only conserves water during our drought–it gives all of our ski resorts a way to stay in business.

This amazing photograph of a single snowflake was taken by amateur photographer Alexey Kljatov, who says that anyone can do the same thing with a simple point-and-shoot camera and a lot of persistence, patience and luck. This is his hobby, and it fascinates him for the same reasons snowflakes mesmerize all of us–they’re beautiful to look at up close.

Even though they say that no two snowflakes are alike, that’s not entirely true. If you look at them with a microscope, down to the molecular level, of course they’re all different. But at the superficial level, they start to look alike and can be classified into 35 distinct shapes. These flakes form their distinct shapes based on the atmospheric conditions surrounding them. Different conditions and temperatures, different shapes.

What causes snow anyway? When water vapor in the air drops below freezing, it crystallizes around particles of dust–then boom, snowflakes!

I had a friend once who traveled to Nepal and came back with all kinds of insights into the meaning of life and our place in the universe. Nepal will do that to you I guess, being close to the highest elevation point on the planet.

Imagine being high up in the mountains at close to 17,000 feet. The snow leopard hunts wild sheep and goats in silence, almost as quietly as the falling snow. They are built for this harsh environment, with long thick fur to protect them against the cold and wide padded paws that make for natural snowshoes. They also have extra long tails which help them balance when climbing steep, rocky slopes. These magnificent big cats are fascinating to me, and sadly they are on the verge of extinction as farmers encroach on their habitat, and natural food sources become harder to find due to climate change. They are also being hunted and killed by poachers for their fur.

It is estimated that there are only about 6000 snow leopards left in the world, most of them in China and other parts of Central Asia. Interestingly, they have been protected the most by Tibetan monks, who live in close proximity to their habitats. Buddhist beliefs dictate a respect and compassion for all living things, and protecting the snow leopard is just one aspect of their spiritual values. For more information on the disappearing snow leopard you can go to the Snow Leopard Conservancy site.

Ha! Just an excuse to get my favorite dessert into this post! Shave Ice is basically snow with syrup on it, right? So don’t eat the snow off the mountain–it might be recycled waste water! Eat shave ice instead!