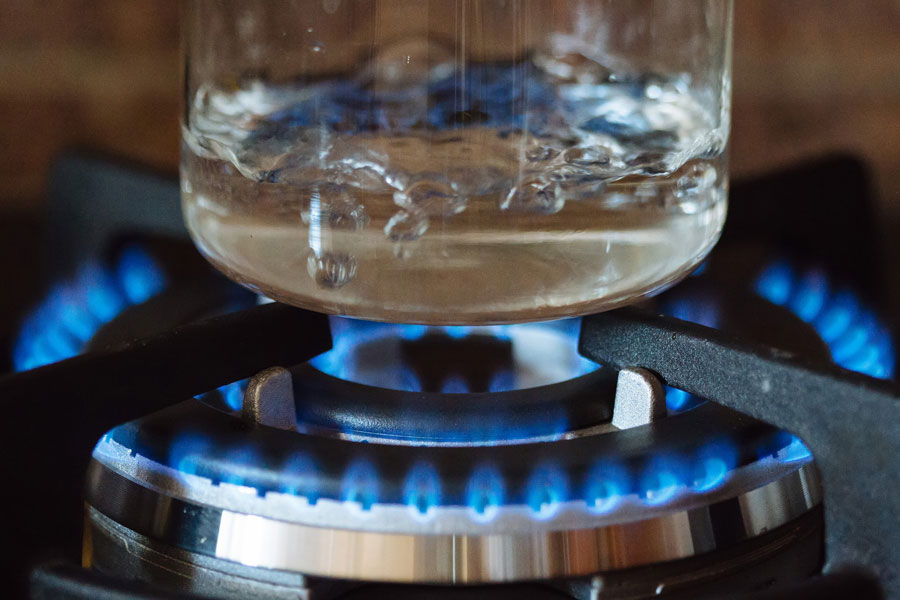 If you’re one of those people who are ashamed to admit that you’re “such a bad cook, you can’t even boil water,” you shouldn’t feel so bad. Boiling water is more complicated than you may think. First of all, did you know there are 4 degrees of boiling water that are commonly found in recipes—SIMMER, SLOW BOIL, FULL BOIL and ROLLING BOIL. And let me preface that by saying the differences are kinda minute, so they may very well blend into each other. On the other hand, Chinese tea aficionados have an additional stage and have 5 degrees of boiling—all the better to be more precise, when you’re fussy about brewing your tea.

Boiling is boiling, you say? Ah, not so fast, grasshopper! The longer you boil, the hotter the water—the hotter the water, the more your food cooks, and the more it cooks, the more it changes; in texture, in flavor, and even in chemical makeup. This explains why controlling the boil is critical in cooking, and why recipes are specific to what kind of boiling water should be used. When it comes to tea, the leaves are delicate. Water that is too hot will scorch it, and you won’t be getting the full, true flavor of the tea. So if you’re a true tea drinker, either master the Chinese way of boiling water, or get a water boiler like the kind Zojirushi makes, and you’ll never have to worry. More on that later… 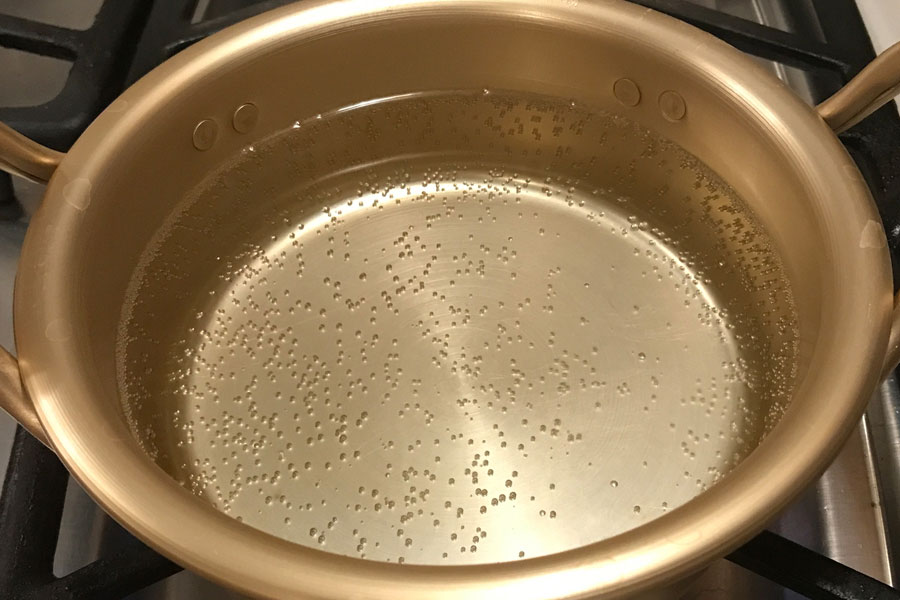 As in a “simmering feud”, at this stage, tiny bubbles have formed at the bottom of your pot, but they aren’t really large enough yet to rise to the top and break the surface of the water. Temperature is roughly 140°F to 170°F at this point, which makes it ideal for gently poaching meats, fish and eggs—keeping them tender and delicately preventing any harsh movement that could cause them to break apart in the pot. 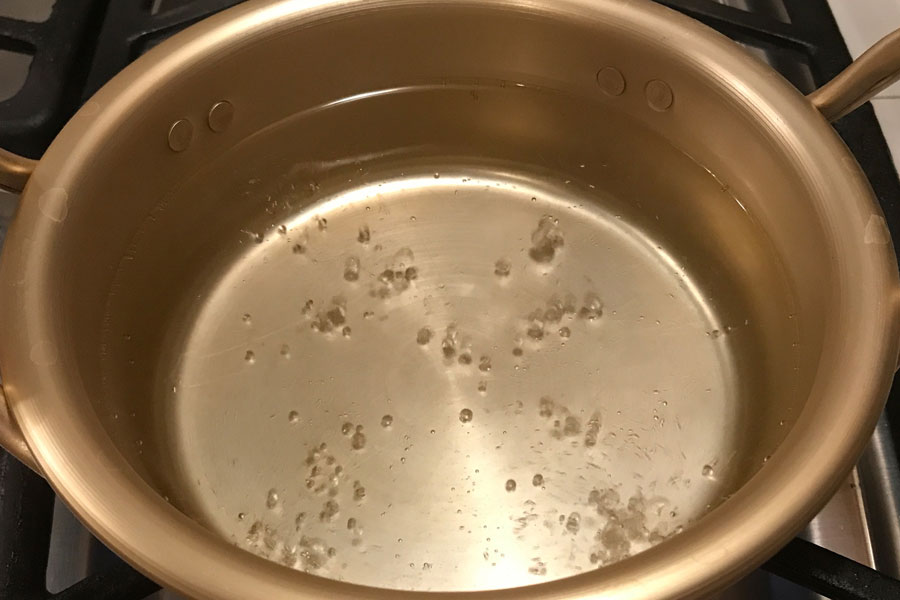 AKA the “lazy boil”, the water agitation is kept to a minimum and bubbles are rising and popping but kind of in isolated areas on the surface. The temperature is roughly 170°F to 195°F, usually the range used to make soup stock or slow-cooking stews. When meats are added to the stock, the lower temperature keeps the proteins from emulsifying into the liquid, keeping the stock clear—the created scum simply settles to the bottom of the pot. 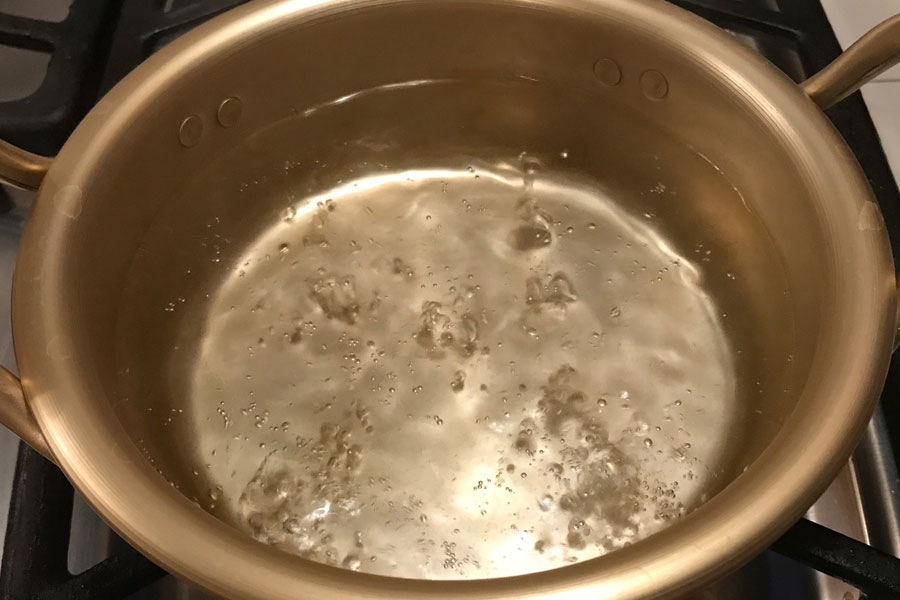 Now we’re at close to the boiling point, which is 195°F to 212°F; smaller bubbles are breaking over the surface everywhere and there’s all kinds of constant action. This kind of boil is best used for reducing sauces, which is a controlled way of evaporating the liquid in an open pot in order to thicken and intensify the flavor. The steam is also good for cooking tender vegetables in a basket placed above the boiling water. 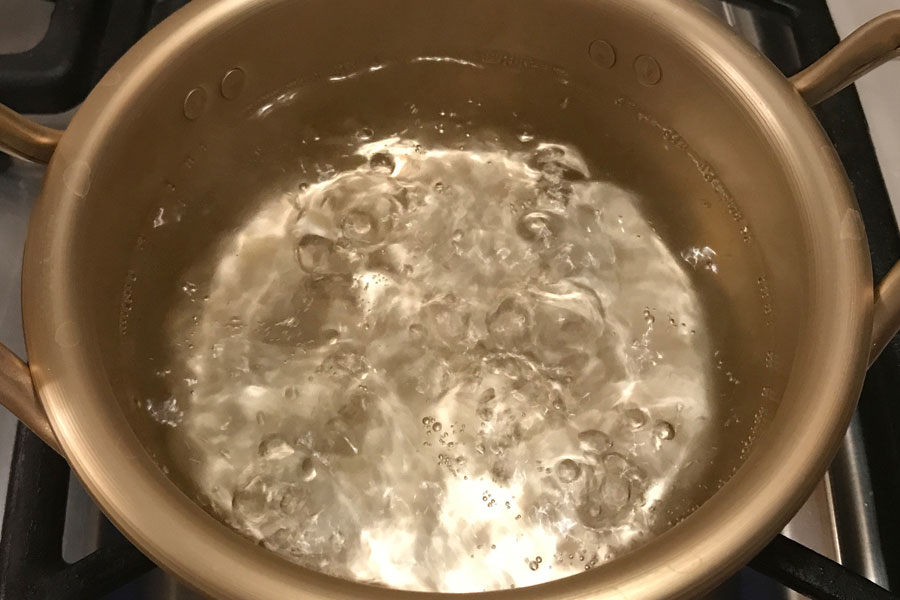 At the max temperature of 212°F, the water cannot get any hotter than this. Large bubbles are violently breaking over the surface and you’re in full agitation mode—so many bubbles that you can no longer cause any kind of break in the action by stirring. But because the heat is highest and constant now, the rolling boil is perfect for blanching vegetables or cooking pasta.

With blanching, vegetables like asparagus or broccoli are scalded for a couple of minutes, then quickly removed and dropped into ice water. The sudden temp change shocks and stops the cooking process—preserving the color, flavor and texture. It also cleanses the surface of dirt and organisms, and helps to slow the loss of vitamins.

Boiling pasta at this temperature has a couple of benefits. Al dente pasta usually requires a precise cooking time. Since the water is already at its highest, any drop in temperature when you put the pasta in, is minimal and won’t affect the cooking time—so you can be accurate. Plus the extreme agitation helps to keep the pasta from sticking together. 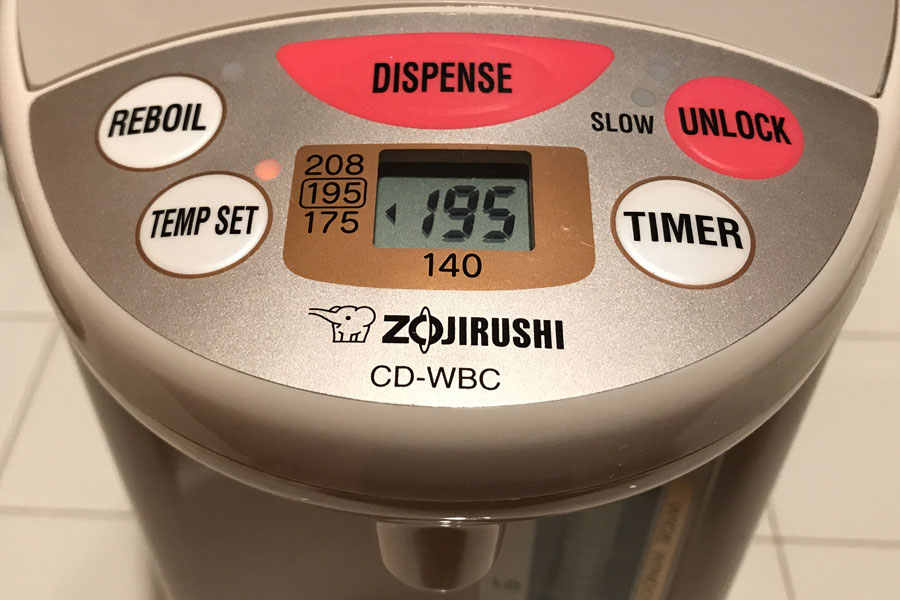 My Zojirushi Water Boiler has 4 temp settings that allow me to choose the best hot water for my tea. We drink a lot of Japanese tea around my house, so having one of these has become indispensable. To be honest, I’m probably not as critical about my water temperature as I could be, but the kids need it to be hot enough for the occasional cup of instant noodles—and you don’t need to be picky about that. I use it for instant oatmeal sometimes too.

It’s interesting to hear how some older generation Chinese measured their boiling water by describing the bubbles and the water with colorful phrases. From simmer to boil, the bubbles grow from “Shrimp Eyes” to “Crab Eyes” to “Fish Eyes”. Then the action in the water starts to look like a “Rope of Pearls”, until finally the churning and swirling is like a “Raging Torrent”. So there you go—5 degrees of boiling water. I love those descriptions!

If you want to get more precise with your hot water and brewing your tea, you can read about it here on the Zojirushi site.

credits: Chinese tea brewing knowledge by Golden Moon Tea blog
“Boiling water” by Ervins Strauhmanis is licensed under cc by 2.0
all other images by Bert Tanimoto