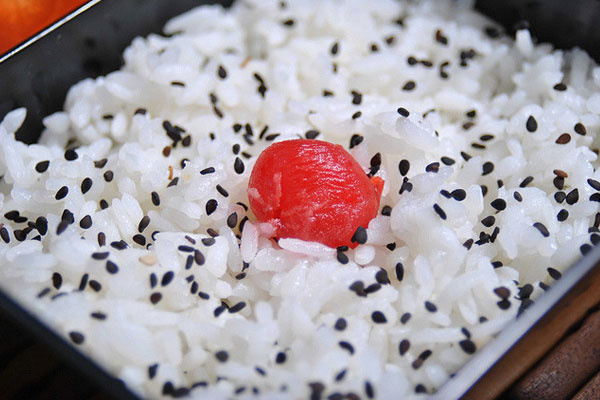 If you’ve been guilty of this, you’ve probably been told not to pour soy sauce on your rice if you visit Japan (yes, it’s bush league). But that doesn’t mean the Japanese eat their rice plain and without flavor. No, the trick is to take a mouthful of salty grilled fish, tangy deep fried pork or whatever tasty dish you have in front of you, then eat your bland white rice. If you think about it, you wouldn’t want your rice to be salty or spicy too, if you’re eating it with another dish.

But what happens if you don’t have enough dishes to eat with your rice? Or if you’re still hungry and all you have left is a bowl of rice? You do what the Japanese do—you look in your refrigerator or cupboard and find the dozens of ways to accompany your rice so that it isn’t so plain anymore. You do not pour soy sauce on it!

So stock up on some of these condiments—you can find them at most Asian grocery stores, so no excuses: 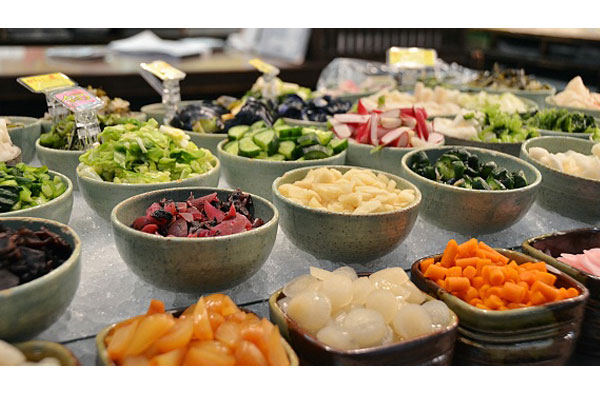 Oh, if you’re not familiar with the amazing world of Japanese tsukemono (literally “pickled things”), you’re in for a treat. So many kinds, so many tastes, so good with rice! Just writing this is making my mouth water. I can’t get into every single kind here, but here’s a list of the most popular types in case you see them at the store. They’re named by the pickling agent that is used to make them:

You’ll find a variety of vegetables used to make tsukemono in all its forms, like cucumbers, eggplants, Chinese cabbage, daikon radish, carrots, turnip greens, ginger, scallions, etc. At Japanese restaurants, they’re usually served in their own little dish off to the side. Don’t ignore it next time—try it with some rice; it’s very addicting.

A lot of families pickle their own at home, which is very easy to do these days. All you need is a large earthenware pot, a heavy stone or concrete block, and a cool storage area or backyard to bury it underground. Just kidding! My grandmother used to do it that way, but you can just buy a spring-loaded pickling press and do it on your kitchen counter. These specialized Japanese kitchen gadgets an be found at most Asian markets. 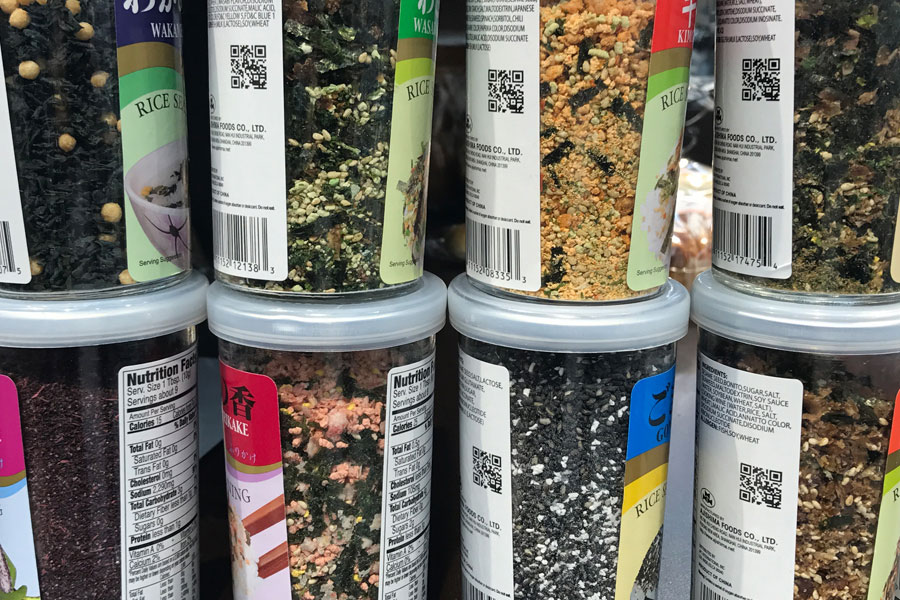 Affectionately known as “rice sprinkles”, the best part of this dry seasoning is that unlike tsukemono, you don’t have to refrigerate it and it has a good shelf life. They come in packets or jars, in multi-colored, multi-flavored varities, and it can be used as a topping on rice, vegetables or fish. Depending on the ingredients used inside the mix, furikake can taste like fish, eggs, sour plum, seaweed, spicy wasabi, or even teriyaki. This is a great way to eat leftover rice or as seasoning on bento rice (makes it look good too). My favorite way of using furikake is to mix it in hot rice and to roll it into rice balls (onigiri).

If you go looking for furikake, be sure to see what kind of ingredients are in it, so you’ll know whether it’s going to make your rice salty, sweet or sour. The seaweed,shrimp and egg varieties tend to be milder and have a slight sweet/aromatic flavor. Most of them fall into the salty range and many are quite deep with umami when sprinkled on hot white rice. If they have bits of dried plum bits (umeboshi) you can taste the tangy sourness mixed in. And if you’re not good with spicy, make sure it doesn’t contain wasabi or kimchi flakes—but if you like spicy, I think they really dress up your rice!

Here’s a handy chart put out by Asian Food Grocer, an online supplier. You can also find furikake at most Asian supermarkets. 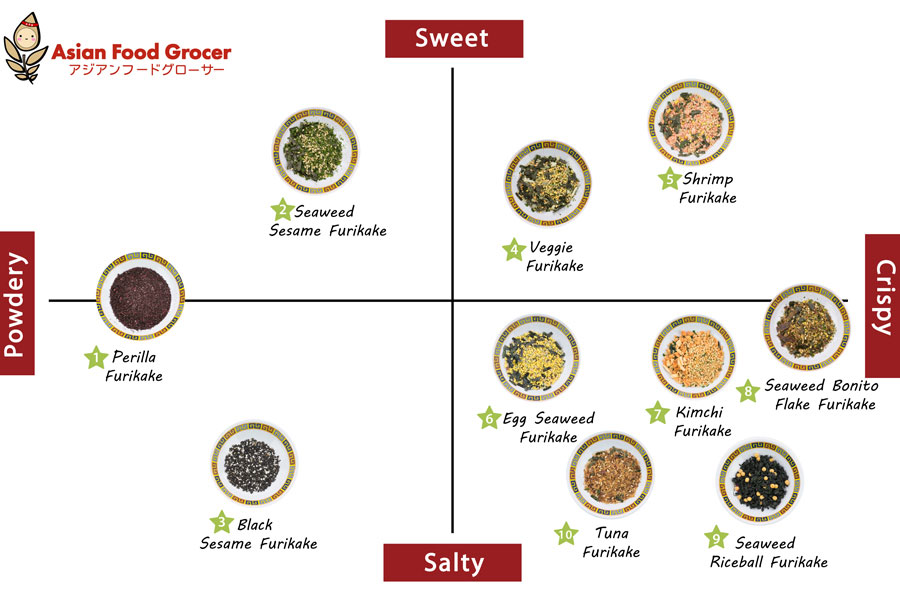 The type of seaweed (nori) than you see on sushi doesn’t have any flavor added to its already rich umami, but there are flavored kinds (ajitsuke nori) that you can eat with white rice that are excellent during meals. You may have seen them as a common add-on at a typical Japanese style breakfast. They’re usually seasoned with a teriyaki tasting sweetness, and come in narrow sheets—packed in cellophane packaging to preserve crispness. If you want to eat this with your rice properly, practice your chopstick skills, because you’re supposed to wrap the sheet around a mouthful of rice like a small sushi roll and pop it into your mouth.

I prefer tsukudani nori, which is more of a paste made with seaweed and strongly flavored with soy sauce. It’s not the most appetizing of looks for seaweed, but trust me, on hot white rice it’s so good! But use carefully because it is salty. And kids love it—I would slather this on my rice. 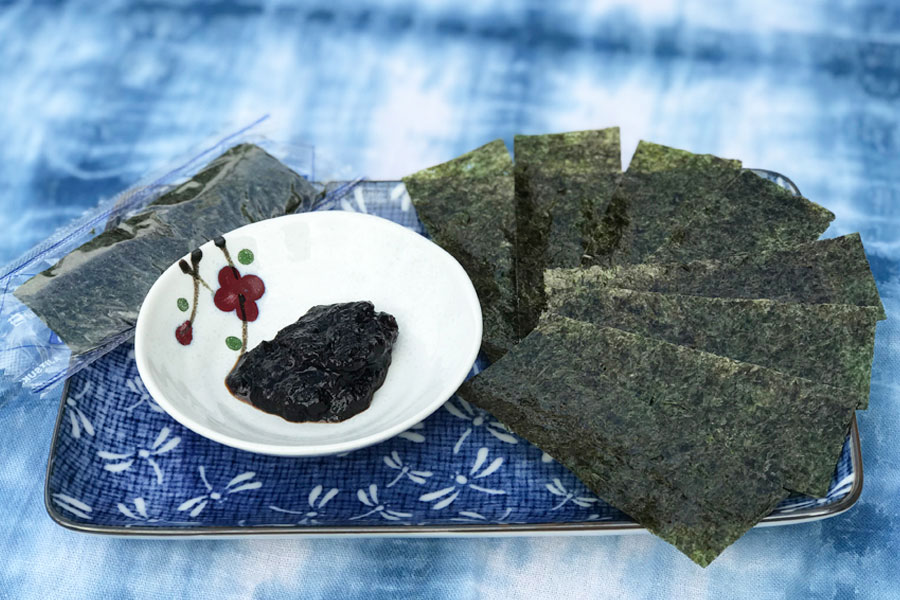 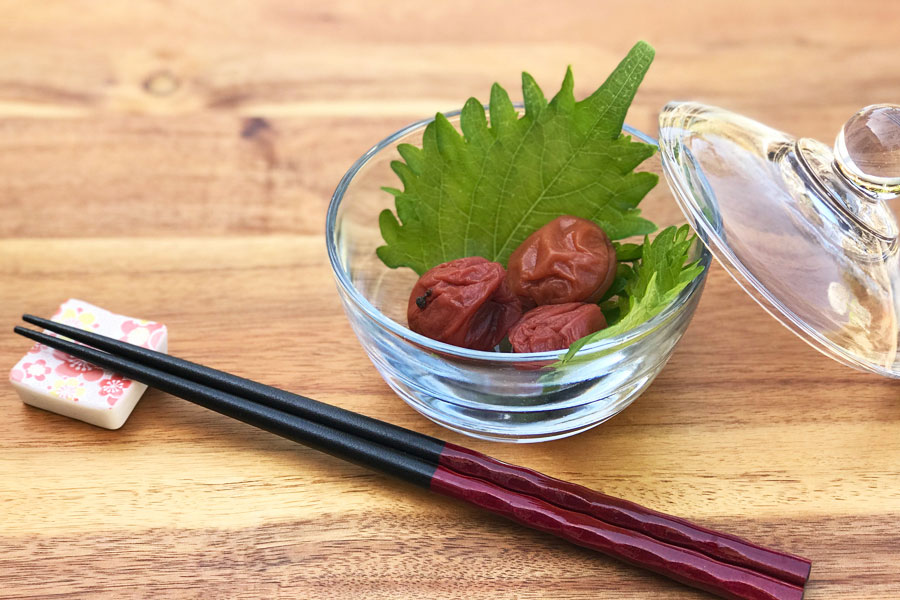 And of course, the classic way to eat white rice is a patriotic one for the Japanese. The mighty sour plum, known as umeboshi, is what decorates the center of a bed of plain rice when you make the traditional “Hi-no-maru Bento”. The traditional hinomaru is named after the Japanese national flag because it resembles it—a red dot on a field of white. Many years ago I remember seeing a comedy on Japanese TV, in which a penniless bachelor would make his umeboshi last by only having one piece for his dinner. He would hang it by a string in front of him and stare at it until the sourness of it made his mouth pucker so he could eat his rice and imagine the flavor. After his meal, he untied the umeboshi and put it away for next time! LOL!

Seriously though, umeboshi is very popular in Japan because they’re also thought to have health properties as a digestive aid, as a prevention against nausea and hangovers, and to help combat fatigue. So good on a bowl of rice, or stuff one into a rice ball (but watch out for the pit)!

Take an egg out of the refrigerator, beat it until scrambled, and add a generous amount of soy sauce to it. Pour the raw egg mixture over very hot rice and stir it up until the egg half cooks or gets frothy. Or drop the egg on the rice first, and pour the soy sauce over it before mixing. This is called Tamago Kake Gohan (egg on rice) and was my father’s favorite way to end his dinners. Don’t let the raw egg scare you—this is good stuff! And it’s the only way you get to pour soy sauce on your rice…

3 thoughts on “How To Eat Plain White Rice”