Our Foreign Foods in Japan series keeps getting better and better! 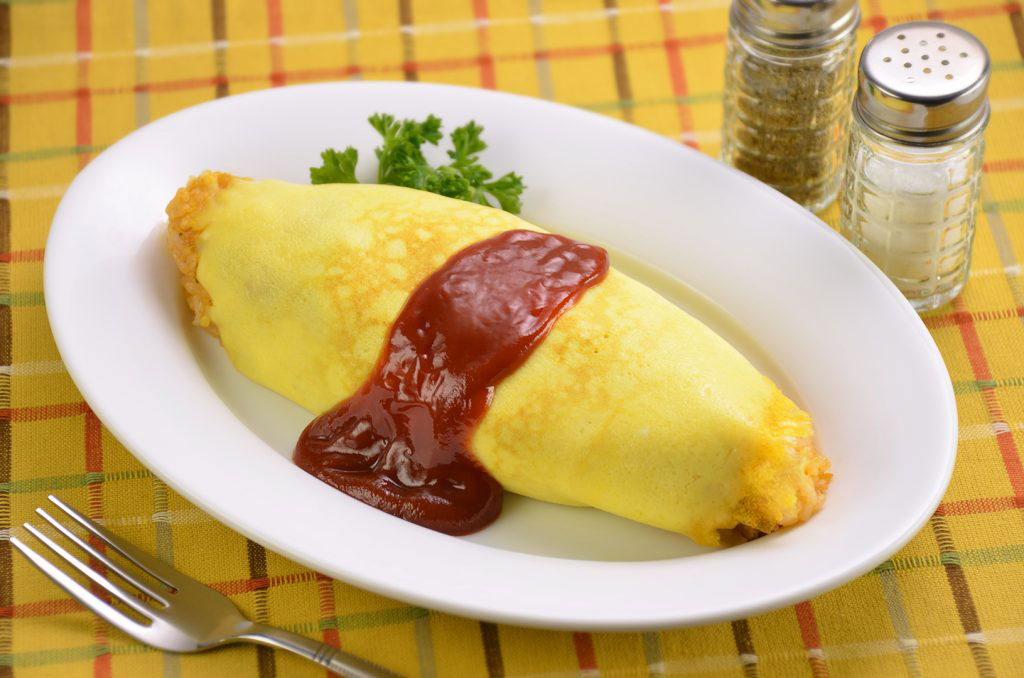 This month we’re featuring omuraisu, or Japanese omelet rice. It’s not found on most menus in the United States, but it’s hugely popular among those who love Japanese food. Omuraisu is a combination of rice, cooked with chicken, vegetables or ketchup, covered by a thin omelet and topped with a savory ketchup. The rice often contains chicken, but can be made vegetarian with items like onions, corn, carrots and peas, and is seasoned with garlic, soy sauce, tomato ketchup and salt and pepper. Home cooks often prefer leftover rice for this dish, so it’s a great way to make an entire meal from a few components.

The omelet used when making omuraisu is usually thinner and softer than a traditional French or American omelet. Beaten eggs are quickly shirred in oil heated in a skillet and folded over, thin and soft. The cooked rice is plated and the omelet laid on top, both covered with thin drizzles of savory ketchup, usually a mix of ketchup and Worcestershire sauce.

There’s nothing more comforting, unless it’s the delicious variations on omuraisu! Omuhayashi, or omuraisu made with hayashi sauce is deeply satisfying. The base of the dish is the cooked and seasoned rice, the soft, draped omelet and then a cooked sauce made with beef, mushrooms, butter, wine and lots of savory seasonings. The hayashi sauce is poured around the omelet, surrounding it like a moat. Every bite is delicious! 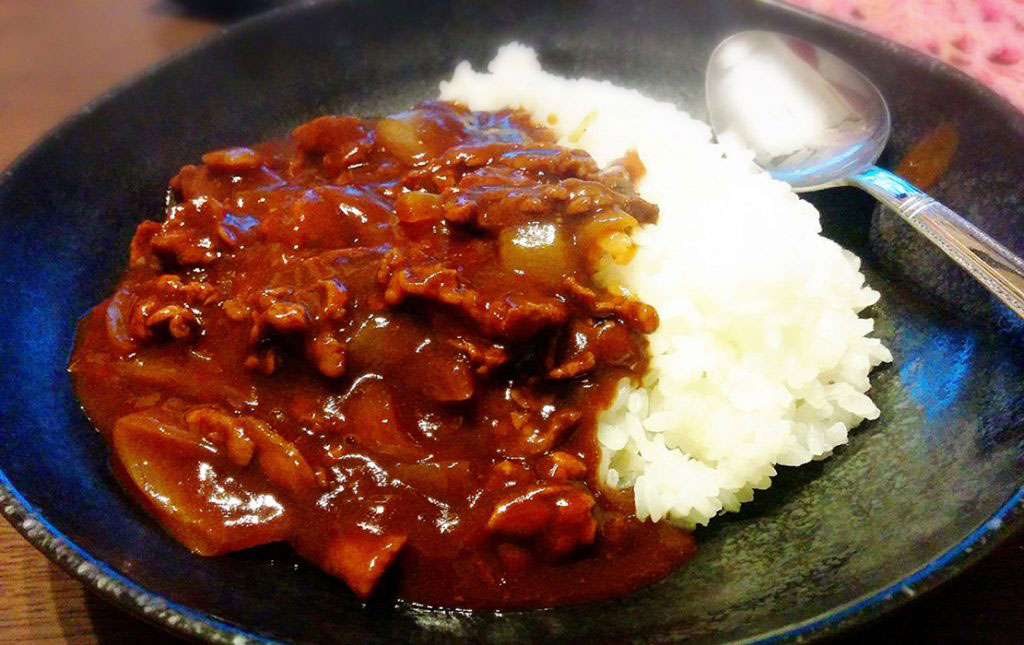 Omusoba marries the best of yakisoba and the soft, tender omelet. Yakisoba is prepared as usual, with noodles and vegetables cooked, then stir-fried in a soy-based sauce. Then, the noodle mixture is topped with the omu-style omelet and drizzled with okonomiyaki sauce and creamy Japanese mayonnaise. (Mouth watering, yet?) 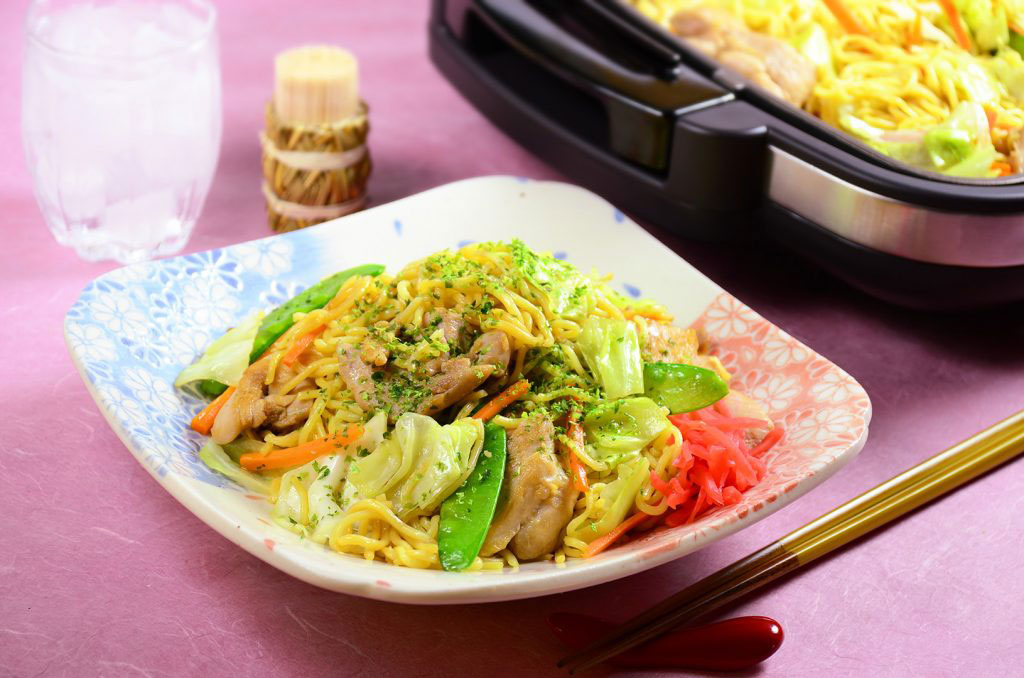 We have a great recipe for omuraisu on our website. Our special version adds mushrooms to the chicken rice along with other delicious ingredients, and uses rice made in our rice cookers. Check it out and tell us how you like it. Wasn’t it the most delicious thing ever?

Olympic fever is already underway in Tokyo, host of the 2020 Summer Olympic Games, and the themes of the games brings together the heritage of old Japan with the modernity we’ve come to expect from the nation.

This concept infuses current Japanese design trends, drawing upon the Ichimatsu pattern, a traditional Japanese two-toned checkerboard design that originated during the Edo Period (1603-1868). During that time, Kabuki theater was hugely popular, and a famous actor, Sanogawa Ichimatsu, elevated the art form with his performances. He had an iconic style and wore pants with the checkerboard pattern on stage. His style became so popular that the pattern was named after him. Today, this design element from centuries ago connects us to fresh imagery in modern times.

Along with these gorgeous finishes, these Stainless Mugs come with a double nonstick coated interior that repels stains and odors. They were made using a special manufacturing process to round the bottle opening, making it more comfortable to drink directly from the mug. Both lid types – flip-open and twist-open – are interchangeable with each mug, allowing for a customized look and drinking experience. And both lid types disassemble for easy cleaning. As always, our Stainless Mugs are built with Zojirushi’s superior vacuum insulation, which minimizes heat transfer and keeps beverages hot or cold for hours. The 1 5/8” (4cm) wide mouth opening makes it easy to fill the mug with ice cubes and all areas that come into contact with beverages are BPA-free.

Grab one of these Stainless Mugs and fill it with fresh water, Black Iced Tea or Simply Iced Coffee. We know you’ll love these new, lightweight Stainless Mugs as much as we do. Check them out and let us know what you think!

It’s summer time and we always have one of our vacuum insulated mugs on hand. Water, iced tea, hot beverages…no matter what, our stainless mugs are designed to let you carry your favorite beverage in style. 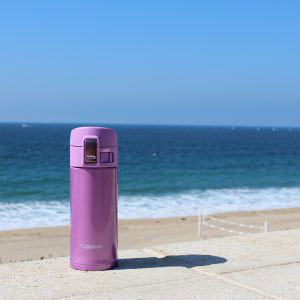 Over the years, we’ve listened to your feedback, and incorporated four smart design features into the lids we use for our stainless mugs: the two-step release and the safety lock in the flip-open mugs, the covered sipping area and the disassembling parts for all mugs. 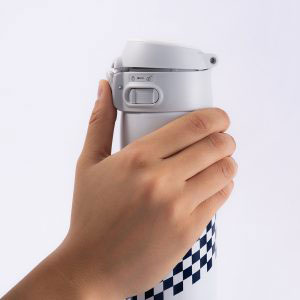 Flip-open lids are super convenient. They’re great in any situation where one-handed operation is required, such as when traveling. The two-step release in our flip-open lids works by allowing the lid open in 2-steps. The first step happens when you push and hold the open button. The open button hooks onto the lid and prevents it from opening, and at the same time, allowing condensation on the lid to flow back into the mug. When you release the button as the second step, the spring at the hinge of the lid will allow the lid to spring open, and because of the first step, wont’ fling any condensation at your friend while doing so. As long as nothing is impeding the back of the lid, the lid will open all the way and stay in place, making it easy to drink without getting bumped in the face by a wobbly lid.

The smart safety lock feature of the flip-open lids ensures that the lid doesn’t accidentally open in a bag or purse, causing leaks and spills.

Along with these great features, both the flip-open and twist-open lids are designed to keep the sipping area clean by keeping it covered when you’re not taking a sip, so you don’t have to worry about getting sand on the sip area if it tips over at the beach. . Perfect for summer beach days!

And finally, the disassembling parts of our lids, whether flip-open or twist-open, mean the lids can be thoroughly cleaned. It’s the worst to find that you’ve been cleaning the lids of other bottles and yet there is still dirt, or worse, mold, inside the components. Each piece is washable and gaskets allow the re-assembled lid to fit tightly and securely.

Each of these features make our stainless mugs stylish and functional…all part of our commitment to smart design. Let us know which mug you have and how you like the lids in the comments below!

In the U.S., we don’t have any national public holidays in the month of August—no wonder the summer seems to drag on, right? But in some countries they celebrate some very odd ones during August, compared to what we’re used to here in the States.

Taiwanese Valentine’s Day—In Taiwan, the Qixi Festival is celebrated on August 17th, when many Chinese couples schedule their wedding day and hold traditional ceremonies (in traditional costumes like you see above). Weddings held en masse are also common. The traditional folk tale behind Qixi Day is a story about a downtrodden ox-herder who falls in love with a fairy maiden, even though an ordinary mortal cannot marry the daughter of a god. When the Queen Fairy Mother finds out, she takes back her daughter and keeps them separated with a line drawn in the stars, which becomes the heavenly Milky Way. The story has a happy ending though, as the couple is allowed to see each other—but only during one day of the year, on Qixi Day.

Today more than 70% of Chinese couples celebrate the holiday in one way or another, with a romantic dinner being the most popular, followed by gifts for their S.O., movie dates, writing love letters, and going to a motel to celebrate(!). That last one is surely universal?

National Picnic Day—In Northern Territory Australia, Picnic Day is a public holiday and a day off for the general population on the first Monday of August. Imagine getting paid to go on a picnic!

Aussies use the extra day for a long weekend to go on trips or to attend the annual Harts Range races, an activity filled day of riding, bbq and dancing. Others go to the town of Adelaide River to have a traditional Railway Picnic, the way the holiday got started back in the late 1800s—as a way to give the hard working rail workers of the area a day of rest and fun. 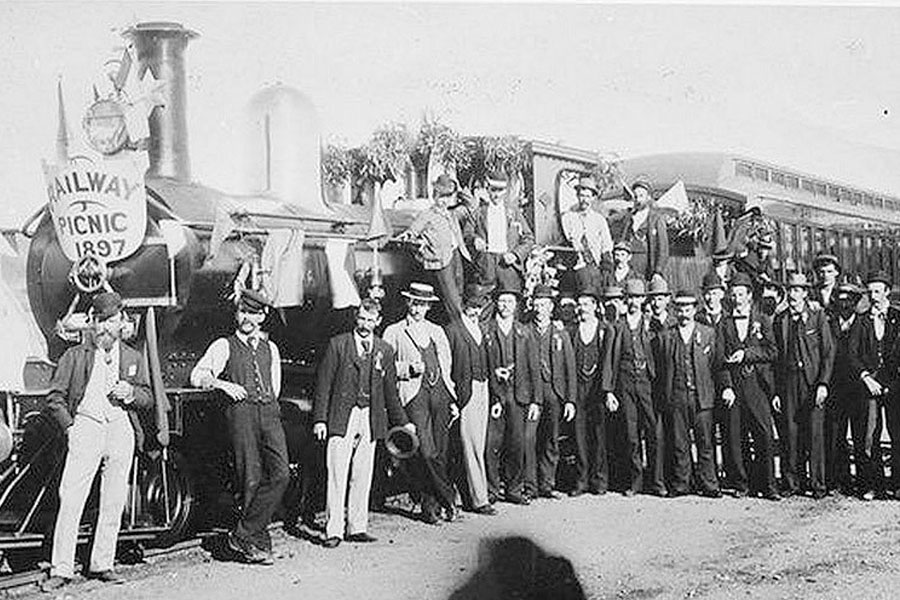 Why not have our own Picnic Day? Take along a Zojirushi Food Jar and a Stainless Bottle or two, and you’re pretty much set for a whole day outdoors!

National Melon Day—August 12th is Melon Day in Turkmenistan, a country in Central Asia near Afghanistan and Iran.

Since 1994, they have celebrated their favorite fruit that is recognized for its importance in Turkmenistan’s culture and history. Fairs and festivals are held in different regions of the country, inviting guests to taste their juiciest and sweetest melons in the world. Over 400 varieties of melon are grown here, including some of the rarest—not an easy feat considering more than 80% of Turkmenistan is desert. Hot sunny weather and long summers are natural factors which contribute to the Turkmen melon’s distinctive feature; a high sugar content that approaches 18 percent! Makes me want to try one…

“Yama No Hi” (Mountain Day)—Japan honors its mountains on August 11th, continuing this newly established national public holiday that was established in 2014. With the island nation being mostly mountainous, the Japanese have long revered their peaks—especially Mt. Fuji, a striking, nearly perfectly shaped active volcano and Japan’s highest elevation.

On Mountain Day, the Japanese are encouraged to take the day off, go hiking on the beautiful mountains, and spend some disposable income to help the economy. In truth, the first day off just got underway in 2016, so it may take some time to get traction and for people to go climbing. Apparently August 11 (8/11) was chosen because the kanji character for “8” resembles a mountain and the number “11” looks like two trees. That’s a good enough reason for me! “Yama-no-Hi” is Japan’s 16th public holiday. 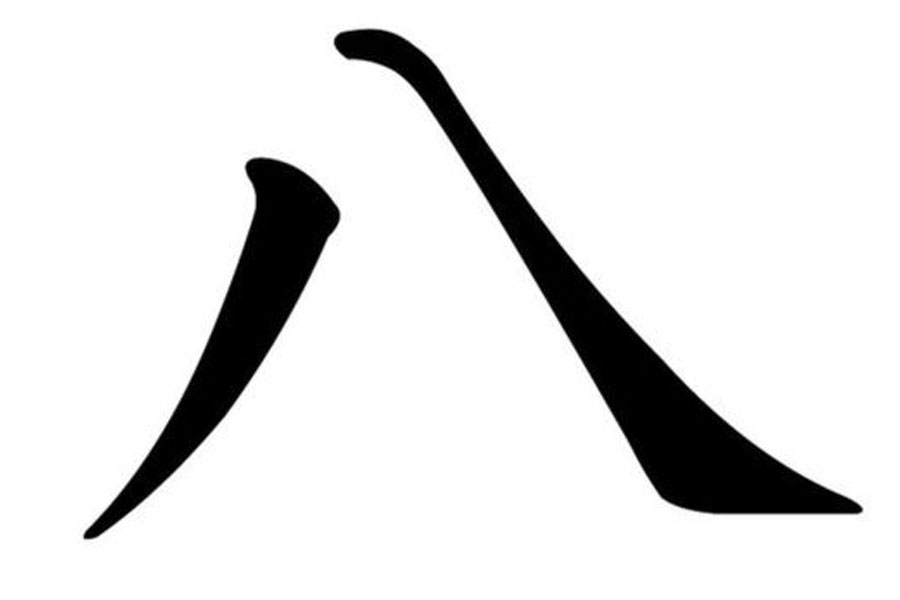 Hawaii Admission Day—My home state joined the Union on August 21st, 1959. What was I doing in back in 1959? I was living in Hawaii and playing with swords instead of lightsabers, pretending to be “Zorro” instead of Obi Wan Kenobi. I mean, check out the old cars in the background! And BTW, if you don’t know who Zorro is, I’m not going to bother telling you. Just Google it.

Obviously I didn’t care whether Hawaii had become a state or not, even though an overwhelming majority of locals voted in favor of statehood, so apparently it was a big deal. 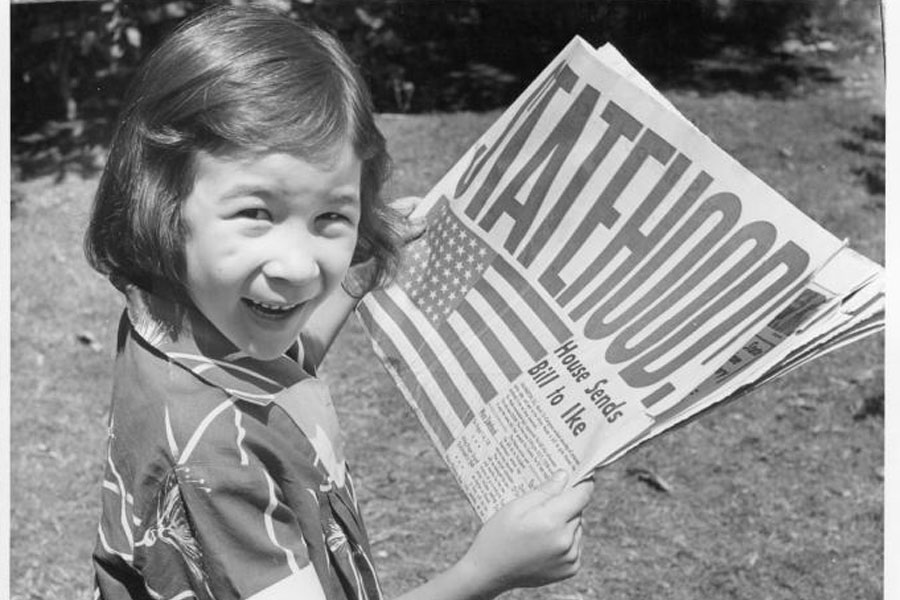 If you want to celebrate Hawaii becoming our 50th state with me this month, eat “local food”, or better yet, make some local food at home. Like Loco Moco, Spam Musubi or Butter Mochi. There is no better comfort food, in my opinion.