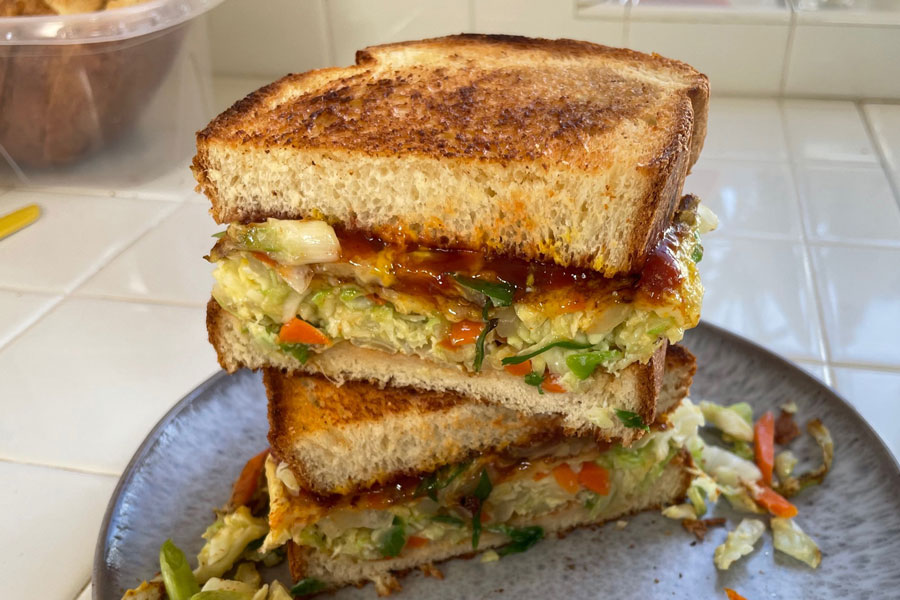 Question of the Day: When you drop a piece of toast, why is it that it always seems to land on the buttered side? Huh? Huh? One popular theory is that you’re holding it an angle anyway, so when it falls (probably less than 6 feet), it only has distance enough to do a half-flip, landing it face down. Ugh! Let’s all celebrate National Toast Day this Feb. 24th anyway, with a few interesting ways to enjoy your toast.

Korean Street Toast What is in this wondrous creation? Only vegetables! It’s a smorgasbord of shredded cabbage, round and green onions, carrots and an egg, fried crispy and layered on thick toast—served up hot right off the griddle. Here’s what goes into this classic toast, also known as gilgeori, that’s so satisfying you’ll be amazed at the “nothing special” ingredients it starts with. 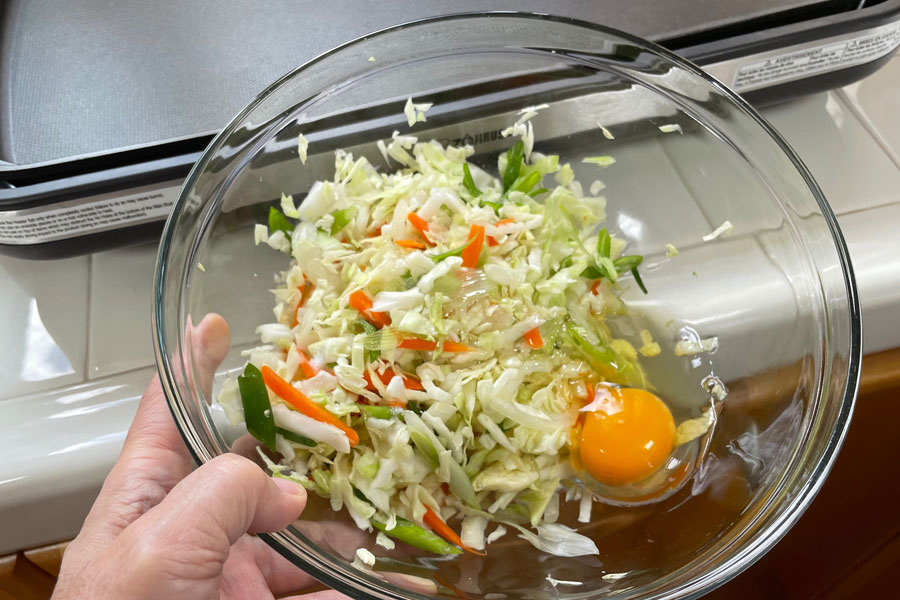 Before you drop the egg in, try massaging the cabbage mixture so it’ll fry up tender. This works, believe me. I used Maangchi’s toast recipe for this, and it’s her suggestion. Butter the slices of bread and shape the veggies into a square as you fry them on a pan. 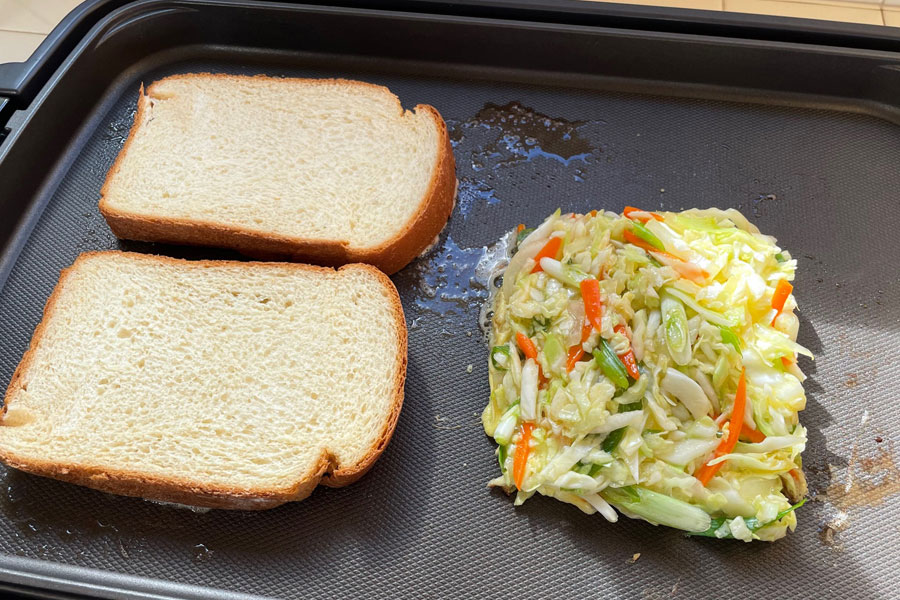 After browning both sides, carefully flip the vegetables and lay the patty on the bread. I used my handy okonomiyaki twin spatulas for this little trick. 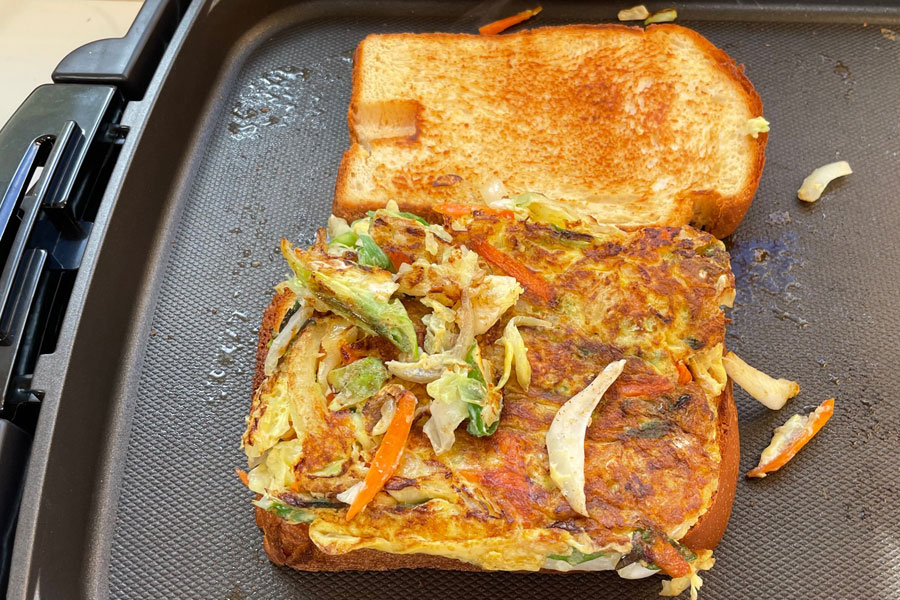 Underwhelming so far? Check out how we dress this thing—add a couple teaspoons of sugar and spread it on top, drizzle some ketchup and yellow mustard! This is genius, right? The sugar seems a bit over the top, but it works. Eat this hot, and I guarantee you’ll be impressed with the burst of flavor. This is a meal in itself. And it’s vegetarian! This is Korean gilgeori toast. 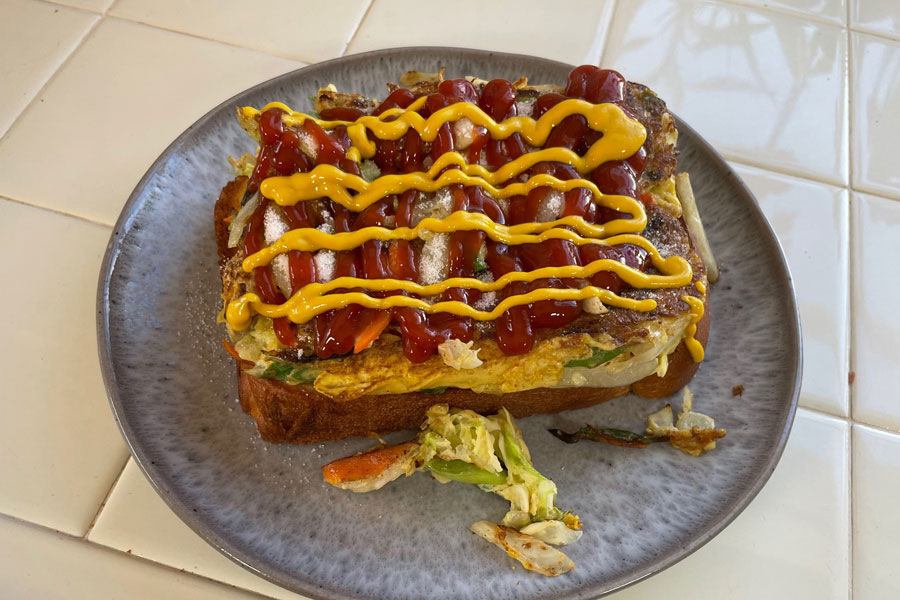 I should mention here that I’m using homemade bread from my breadmaker (I’m getting better at baking them taller). 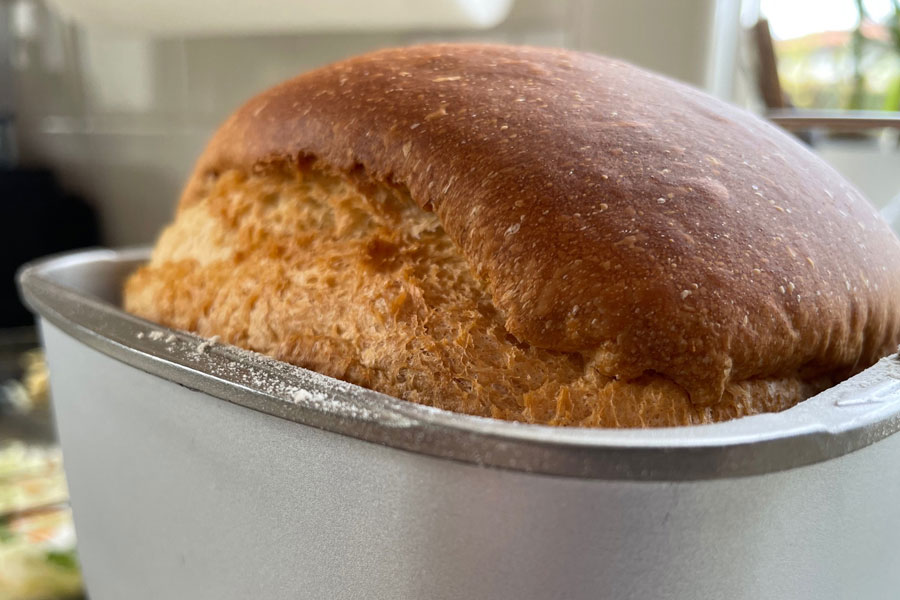 I bought a neat little Bread Slicer to help me get these even thick slices just like at the Japanese bakery. The concept is different from the American ones and a lot less complicated. You lay the loaf on its side and let gravity help to keep it steady as you slice sideways. It works pretty well… 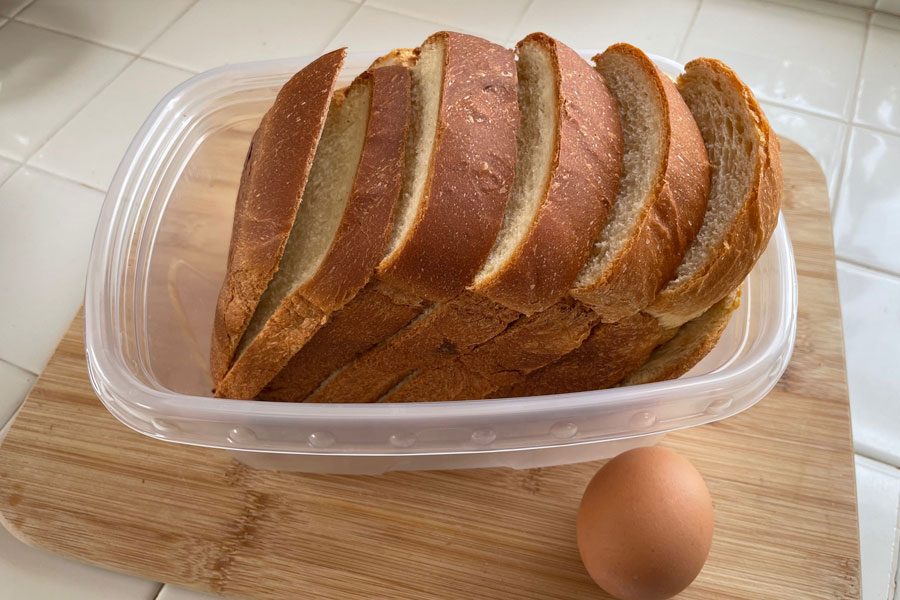 Tsukudani Nori Toast Next I tried this strange combination (at least to me) of toasted bread and nori (seaweed). Specifically I used a seasoned nori paste called tsukudani which can be bought in bottled form. This is a condiment type of spread that is usually used on hot rice, which I love. A little salty and so full of umami. But these guys from TabiEats showed how to use it on bread, so I thought I’d give it a try. 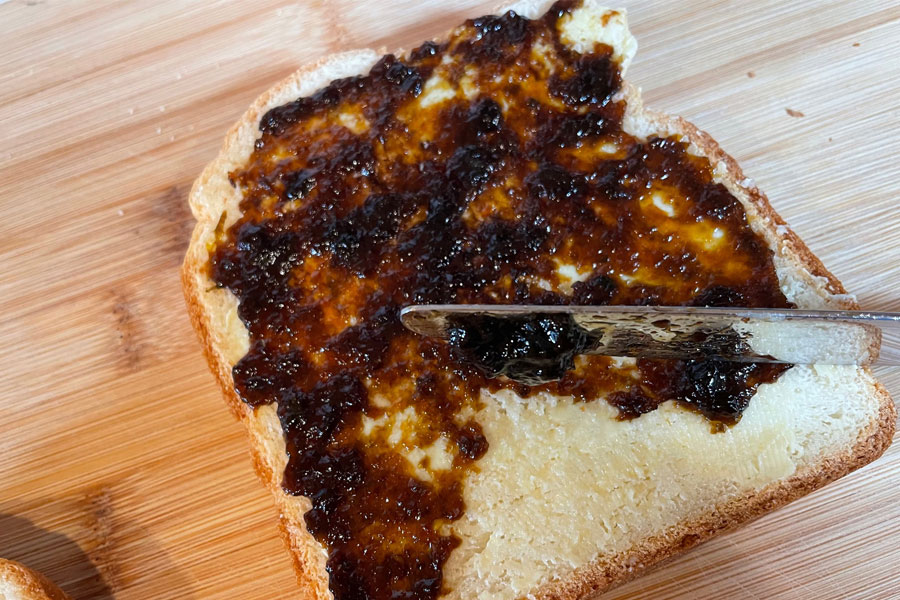 You dress it with cheese and pop it in your toaster oven. I’m not gonna lie—I was more than a little worried about what this could taste like. I mean it’s just weird to pair seaweed with bread, much less eat it with cheese. 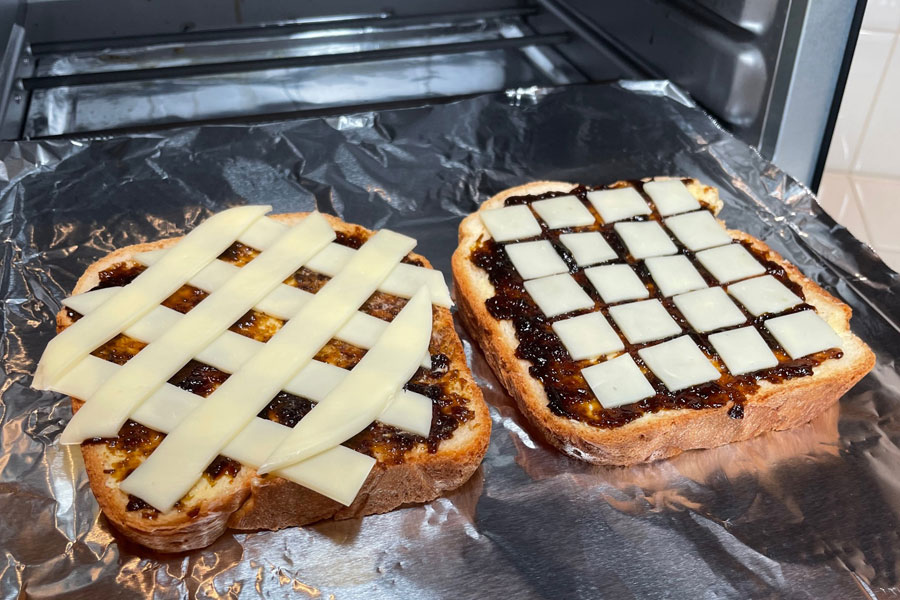 But surprise, surprise! It was tasty! The cheese mellows out the sharpness of the seasoned seaweed, and when it’s toasted I think it gave the bread another level of flavor. What do you think? Ready to try this? 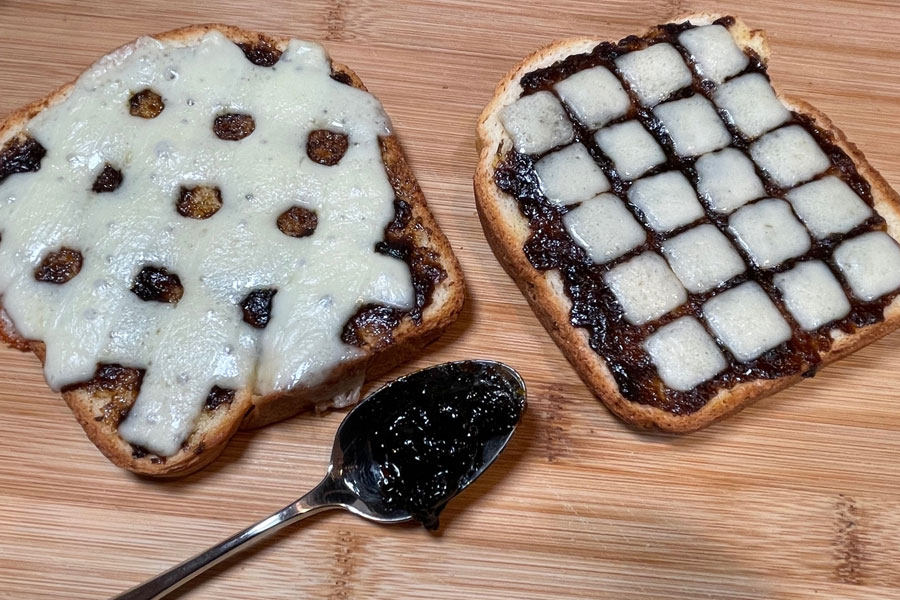 How about some toast trivia?
•The word “toast” comes from the Latin word “tostum”, which means to burn or scorch. Duh.
•Approximately 75 million Americans are believed to eat toast every day.
•Before the use of electricity, people used to toast slices of bread by holding it over a fire like we do with marshmallows.

Egg Toast My last contribution to National Toast Day is a popular Japanese Egg Toast made with herbs and mayo. 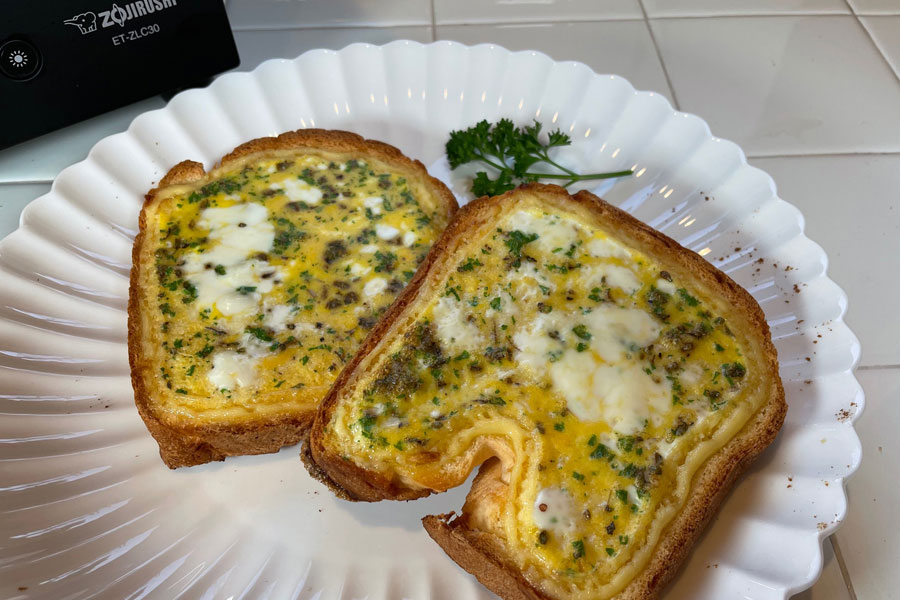 This one is easy. Just make a scrambled egg mixture and season to taste with salt, pepper and parsely flakes. Create a border on your bread with the the mayo and carefully pour the egg on the bread without going over the mayo piping. This is tricky, but steady hands wins the day! 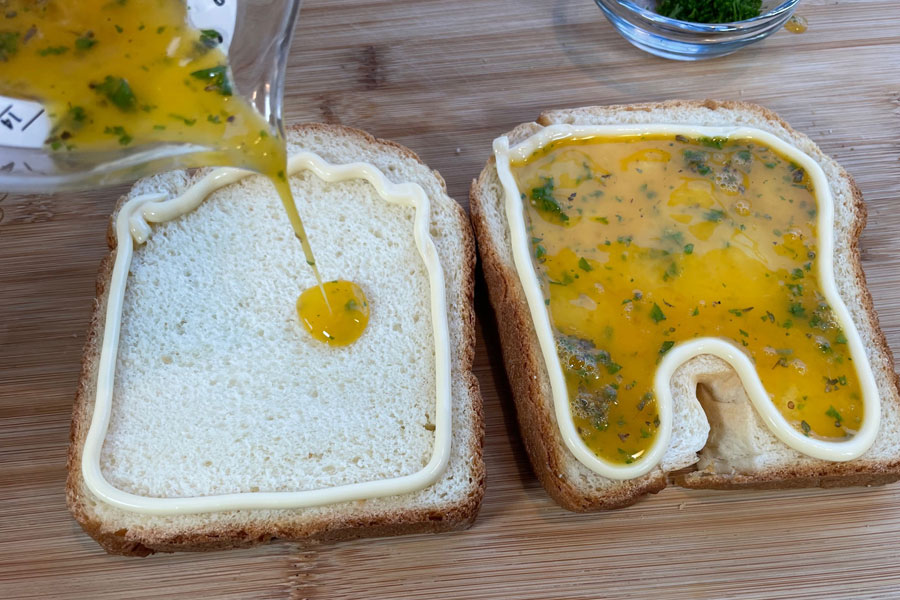 Put it in your toaster oven and bake until brown. 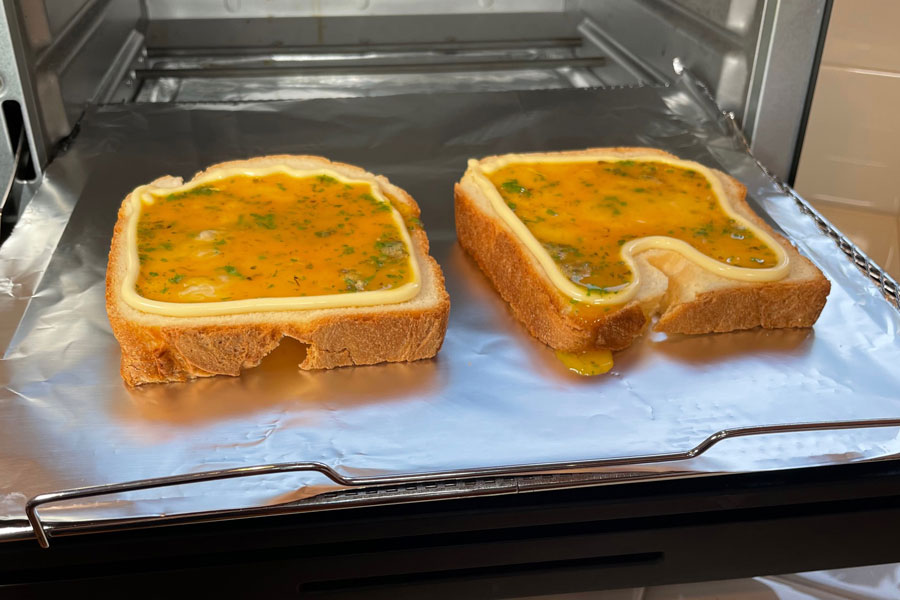 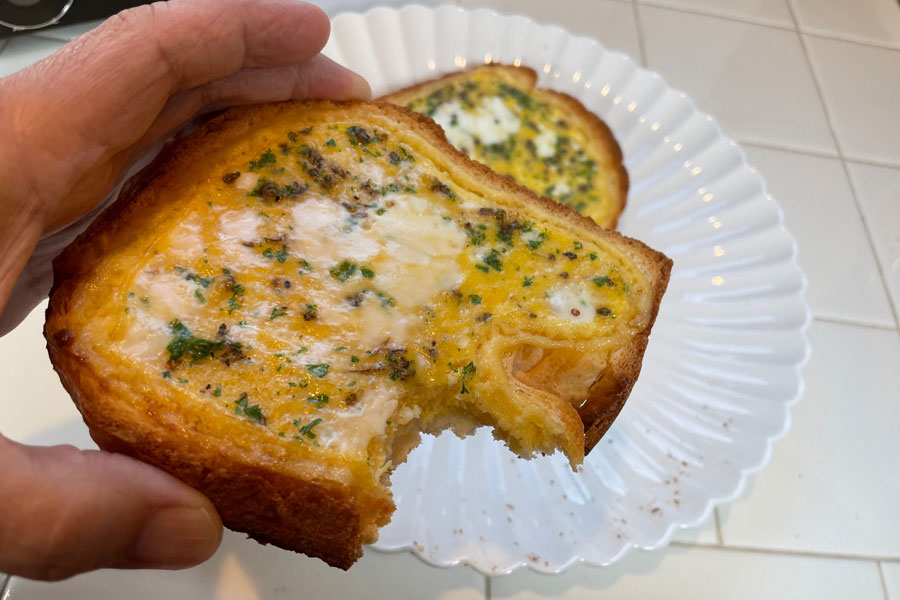 So what do you guys put on your toast? C’mon—get away from the jam and butter and try something different for National Toast Day! If you want to see what Zojirushi does with their toast, visit their recipes and check these out:
Mushroom Pizza Toast
Yogurt French Toast with Fruit