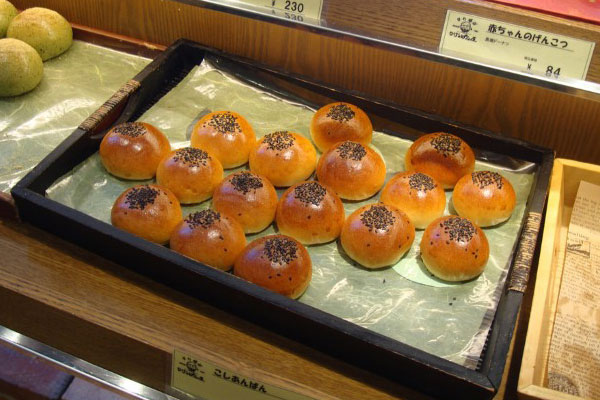 Rice might still be the number one staple in Japan, but bread is so popular that a typical breakfast might be toast and coffee as it would be fish and miso soup. The Japanese word for bread is “pan”, but if you look up the etymology you’ll find the same word for bread in the Portuguese language. It makes sense since bread was first brought to Japan by the Portuguese in the 1500s.

I love all the dessert breads and savory combinations that make up the selection at a typical Japanese bakery. I even like the old-fashioned An-pan pictured above, which I think is still a comfort food to many Japanese. It was invented by Yasubei Kimura, a former samurai who turned to baking when the samurai class was dissolved with the influence of Western culture. Today the Kimuraya Bakery is the oldest chain in the country, and An-pan can be found everywhere, filled with sweet chestnut, white bean paste, and other dessert fillings as well as the traditional red bean paste. The black sesame seeds on top is the classic An-pan look. 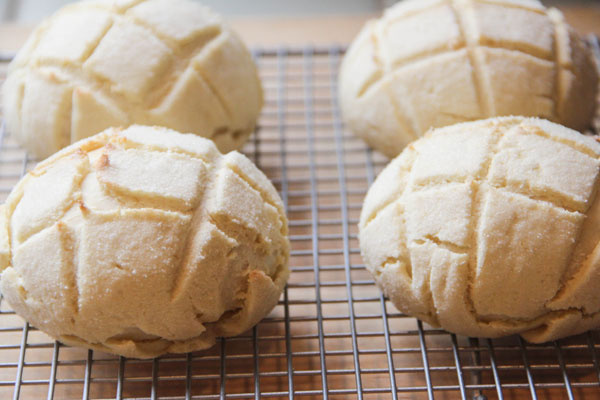 Melon Pan is another of my favorites. It’s not even usually melon flavored, but there’s something about the crusty, cookie dough outer shell and soft, moist bread inside that is so good, it doesn’t need any filing. This is an awesome sweet bread, loved by everyone in Japan, and instantly recognized by its signature cross hatch pattern and round shape–like a melon.

Cream Pan is a soft bread very similar to an-pan in fluffy consistency. The big difference is the filling, which can best be described as a creamy custard. There are all kinds of variations on the outer shape, but to me, it’s the filling that makes a really good cream pan. Not too soft, but firm enough not to ooze out; and eggy like a good custard should be. 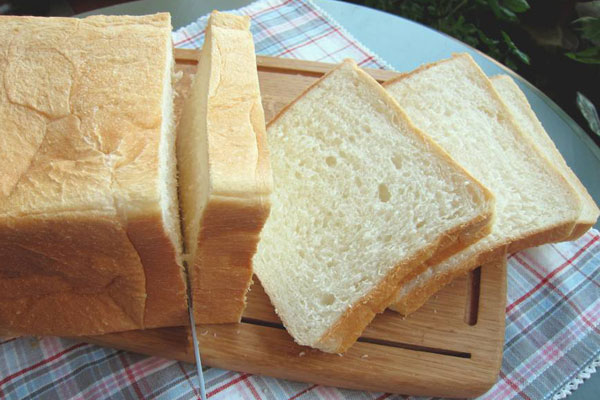 Then there’s the Shoku Pan, a very ordinary loaf of Japanese white bread. This is the kind of bread served at breakfast–sometimes as a simple slice of buttered toast with coffee, called a “Morning Set”. The unique thing about shoku pan though, is the thickness of the slices–sometimes over an inch thick for breakfast, sometimes a thin, one-third inch for sandwiches. Unlike American white bread, shoku pan has a soft, creamy taste and a stretchy kind of texture that is unbelievably habit forming. When making tea sandwiches with the thin ones, be sure to cut off the crust for a better presentation. When I used to make my daughter’s lunches for school, her friends were impressed that the crusts were cut off! LOL. The thick ones make an excellent breakfast–toasted to a golden brown goodness. 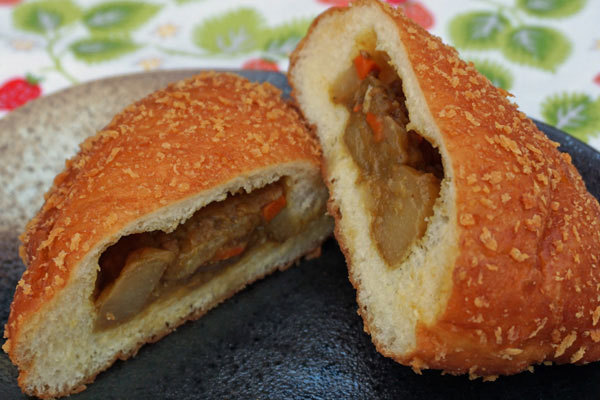 Now let’s get into some savory breads–my favorite thing for snacks and lunches. First up is Curry Pan. Real Japanese style curry, thickened and stuffed into a deep fried dough coated with bread crumbs. Amazing! Maybe a bit oily sometimes, but so good if you’re a fan of curry. These football shaped snacks are very popular and can be found anywhere in Japan–convenience stores, train stations, corner bakeries, vending machines; anywhere! 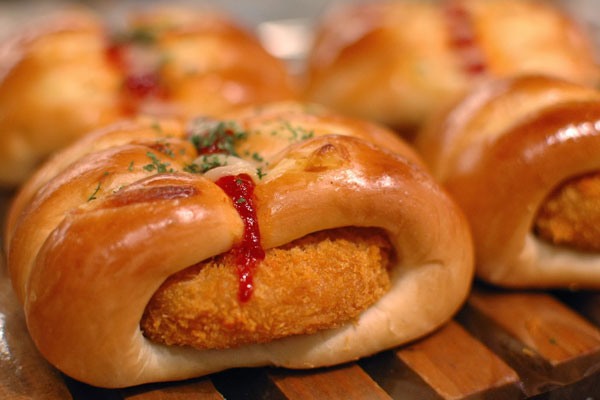 Then there is the Korokke Pan, a deep fried potato croquette wedged in a soft roll and drizzled with a sweet/salty sauce. Even if the croquette (korokke) is unlikely to be crispy anymore after having been on the shelf for awhile, this is still good stuff! A close relative to this sandwich is the Katsu Sando, made with a pork cutlet in place of the croquette. Now that’s a lunch, man. 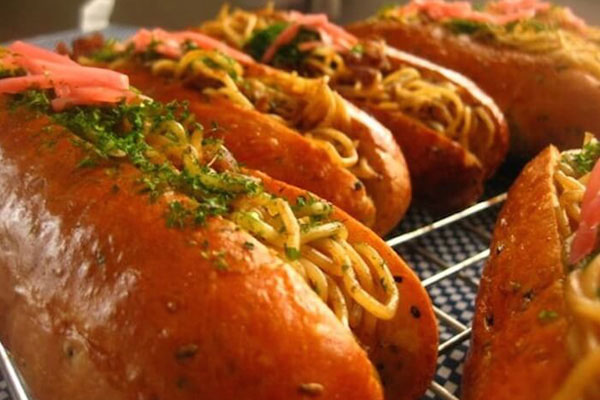 The last one is the very popular Yakisoba Pan, which seems a little top heavy on the carbs when you realize it’s a noodle sandwich, but it works somehow! I guess you have to first be a fan of yakisoba, the chow mein like fried noodles that most Japanese kids grew up with. I’ve always loved this tangy dish because it’s so loaded with flavor. If you can put it between two halves of a hot dog style bun and call it a sandwich, then so be it! I won’t complain.

So that’s my list of top breads of Japan. What are yours? Here are some recipes from the Zojirushi site. Try them for yourself!

credits: an-pan and yakisoba pan by JPinfo.com, shoku pan by JapanTimes.com, melon pan by JapaneseCooking101.com, other images by Bert Tanimoto

5 thoughts on “Pan (The Breads of Japan)”