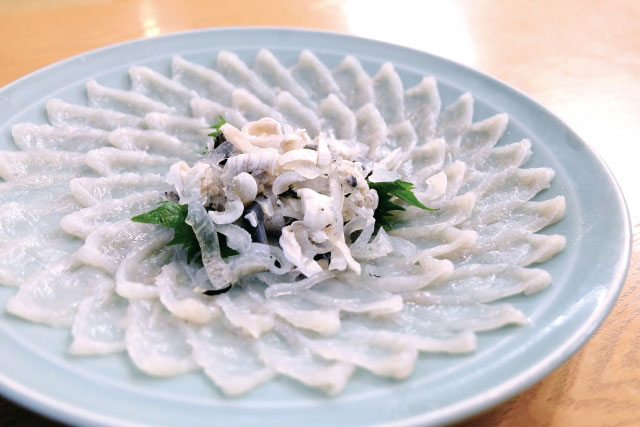 It’s the fatal poison found in the liver, intestines and ovaries of the fugu, or pufferfish. An incredible delicacy, fugu is our feature in this month’s Acquired Taste of Japan, and we’re excited to (virtually) explore the ins-and-outs of this fish.

Fugu are bony fish, ranging from pygmy sizes weighing a few grams, to medium five-pound fish to large ones weighing as much as 20 pounds. These fish are part of the Tetraodontidae and Diodontidae family of fish, known for their ability to intake a large quantity of water and “blow up” in order to deter predators. They eat starfish, mollusks, snails and other sea creatures that contain vibrio bacteria, which creates tetrodotoxin, and poison from these creatures becomes concentrated and stored in the liver, reproductive organs, intestines and skin of the fish.

The concentrated poison found in fugu is called tetrodotoxin and is 1,000 times more toxic than cyanide. It is flavorless, odorless, heat stable and deadly in incredibly small amounts. The Centers for Disease Control and Prevention notes that “the consumption of toxic amounts of tetrodotoxin results primarily in neurologic and gastrointestinal signs and symptoms. In severe poisoning, dysrhythmia, hypotension, and even death might occur. If a rapid onset of one of the following neurologic and gastrointestinal signs or symptoms occurs, the clinical description for tetrodotoxin poisoning has been met: 1) oral paresthesias (might progress to include the arms and legs), 2) cranial nerve dysfunction, 3) weakness (might progress to paralysis), or 4) nausea or vomiting.” 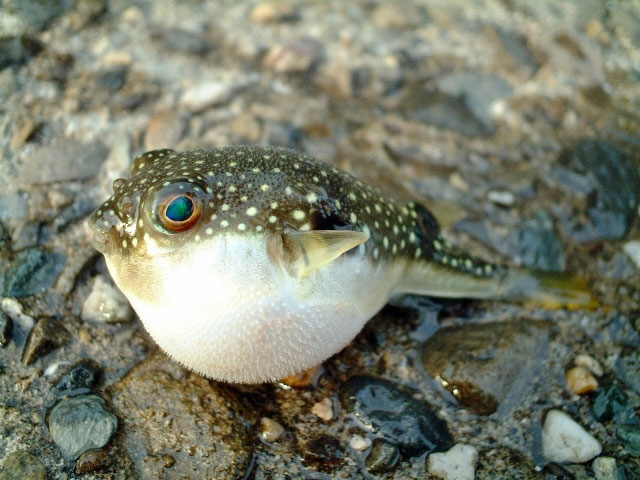 And there is no antidote.

Thankfully, the Ministry of Health, Labor and Welfare in Japan along with trained and licensed chefs know how to prepare fugu’s many delicious parts. The Ministry publishes regulations governing the sale and preparation of 22 of the hundreds of species of fugu for all of Japan, and even controls the export of fugu to other countries like the United States. Shimonoseki in Yamaguchi Prefecture is the main distribution center for fugu as it is shipped throughout Japan and the world.

Fugu is typically enjoyed in winter, when the fish have fattened up to brave the cold waters surrounding Japan. Torafugu, the most commonly enjoyed variety of the fish, is generally served as paper-thin, translucent slices of sashimi, arranged in the shape of a chrysanthemum and garnished with daikon and negi onions and dipped in ponzu sauce. Because it is a delicacy served in winter time, hearty, moist chunks of fugu are also served in hotpot dishes called nabe. Fried fugu is eaten along with the fish’s milt, the shirako we wrote about last month. And the tail fin and mouth parts are often roasted and added to hot sake, imparting a light ocean-like flavor. New dishes like fugu burgers are even on the market! 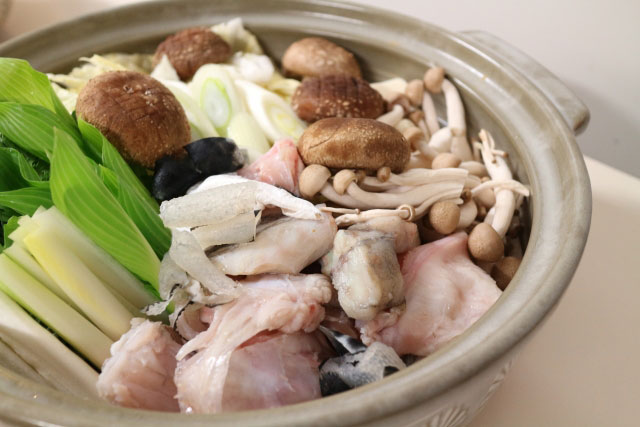 Fugu has been traditionally eaten in Japan for over 2,000 years. Archaeological excavations from the Jomon culture (10,500 – 300 BC) have unearthed fugu teeth fossils from midden heaps. The first restrictions on fugu consumption arose during the Sengoku period (1467-1603 AD), when the warlord Hideyoshi Toyotomi prohibited eating the fish in order to prevent his troops from being poisoned. During subsequent periods in Japan’s history, the fish was either enjoyed publicly or banned and eaten in secret. Fugu is one of the few foods the Emperor of Japan is strictly prohibited from eating. Today, aquaculturists have begun experimental farming to develop potentially toxin-free species of fugu, in order to enable more people to enjoy it, without worrying about the poisonous livers and eggs, parts said to be especially delicious.

Today, gourmet torafugu is enjoyed at restaurants at the cost of around US$200 per entrée! Chefs are trained for three years and must pass an exam in order to be allowed to prepare fugu. More reasonably priced mafugu can be purchased at fish markets by licensed buyers, who then sell it to the general public in supermarkets.

Would you eat fugu? Are you brave enough to try it? Have you already had it? Share your experience with us!