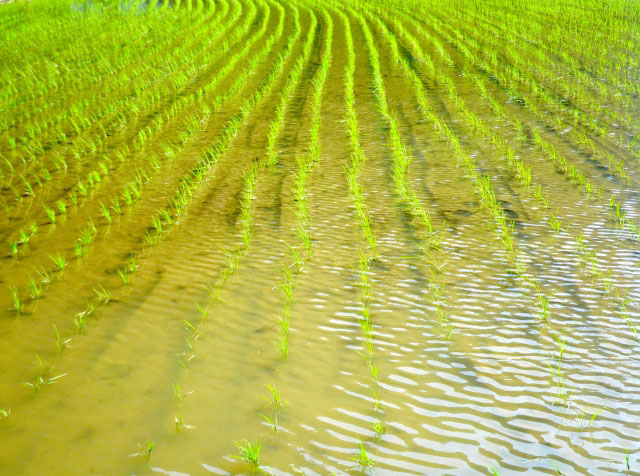 As we discussed in our previous post, rice is cultivated in four stages: sprouting, planting, growing and harvesting. Once rice is mature, usually at the end of summer, rice fields are allowed to dry in the sun or are drained. Harvesting machines, such as combines, gather and thresh the mature rice, so that rice seeds can be transported to drying facilities. Once at the drying facilities, warm air is forced through the rice to remove moisture so it can be stored and further processed. The dried rice is sent to mills where it is cleaned and dehulled, leaving the nutritious bran layer intact, resulting in brown rice. The brown rice is then packaged and sent to market or further polished to remove the bran layer, resulting in white rice. This short-grain white rice is also packaged and sent to market, where it is purchased by home cooks and chefs alike. By the time the rice reaches a person’s plate, it has been touched by many hands and by many days in the sun, water and wind!

Growing rice is a very important part of Japanese culture, and Japanese people participate in rich traditions that celebrate the entire process from initial planting to the harvest.

During the planting season in spring, the people of Sumiyoshi, in Osaka, believe that an auspicious beginning to the season will help the rice grow. To create a happy atmosphere that fosters good energy for the year’s crop, the community asks eight ceremonial maidens, called ue-me, to sanctify the rice seedlings at the local shrine. These blessed seedlings are given to the shimo ue-me, another group of women who participate in the festival, to plant them in the rice field to begin the season.

This elaborate and beautiful play is a delight to watch:

Planting leads to growing, and growing rice depends on abundant rain, fertile soil and lack of disease and pests. The people of Tsurugashima gather for a tradition called the Suneori Amagoi, during which they supplicate their water-loving snake god for abundant rain to help grow their rice crops. They build a giant decorative snake from bamboo and straw, imbue it with symbolic sacred charms, and parade it through the town to Kandachi Pond, where it is symbolically brought to its sacred home.

…and we mean giant snake:

During the summer months, pests can become a problem in the fields, so the people of Yata celebrate a tradition called Yata-no Mushi Okuri. During this festival, the people build a straw effigy of Saito Sanemori, a warrior from the Taira clan, who became angry when he was defeated in battle and whose grudge was transformed into an insect. They parade this effigy through the rice fields, with the goal of burning it at the end of the procession. The burning effigy is said to attract and kill the insects and pests in the area, and by doing so, release the crop from the warrior’s grudge.

As the summer turns into autumn, and the rice crops mature, rice-growing communities pray for an abundant harvest, giving thanks upon the season’s conclusion, when the land and the people can rest.

While traditions may vary from region to region, each of the seasons at the rice fields are beautiful, and if you’ve traveled to Japan to see them, we’d love to hear your stories.